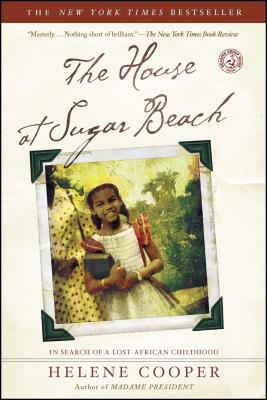 By Helene Cooper
for information about purchasing this book, please contact orders@bookpassage.com

Journalist Helene Cooper examines the violent past of her home country Liberia and the effects of its 1980 military coup in this deeply personal memoir and finalist for the 2008 National Book Critics Circle Award.

Helene Cooper is “Congo,” a descendant of two Liberian dynasties—traced back to the first ship of freemen that set sail from New York in 1820 to found Monrovia. Helene grew up at Sugar Beach, a twenty-two-room mansion by the sea. Her childhood was filled with servants, flashy cars, a villa in Spain, and a farmhouse up-country. It was also an African childhood, filled with knock foot games and hot pepper soup, heartmen and neegee. When Helene was eight, the Coopers took in a foster child—a common custom among the Liberian elite. Eunice, a Bassa girl, suddenly became known as “Mrs. Cooper’s daughter.”

For years the Cooper daughters—Helene, her sister Marlene, and Eunice—blissfully enjoyed the trappings of wealth and advantage. But Liberia was like an unwatched pot of water left boiling on the stove. And on April 12, 1980, a group of soldiers staged a coup d'état, assassinating President William Tolbert and executing his cabinet. The Coopers and the entire Congo class were now the hunted, being imprisoned, shot, tortured, and raped. After a brutal daylight attack by a ragtag crew of soldiers, Helene, Marlene, and their mother fled Sugar Beach, and then Liberia, for America. They left Eunice behind.

A world away, Helene tried to assimilate as an American teenager. At the University of North Carolina at Chapel Hill she found her passion in journalism, eventually becoming a reporter for the Wall Street Journal and the New York Times. She reported from every part of the globe—except Africa—as Liberia descended into war-torn, third-world hell.

In 2003, a near-death experience in Iraq convinced Helene that Liberia—and Eunice—could wait no longer. At once a deeply personal memoir and an examination of a violent and stratified country, The House at Sugar Beach tells of tragedy, forgiveness, and transcendence with unflinching honesty and a survivor's gentle humor. And at its heart, it is a story of Helene Cooper’s long voyage home.

Helene Cooper is the Pulitzer Prize–winning Pentagon correspondent for The New York Times, having previously served as White House Correspondent, diplomatic correspondent, and the assistant editorial page editor. Prior to moving to the Times, Helene spent twelve years as a reporter and foreign correspondent at The Wall Street Journal. She is the author of the bestselling memoir, The House at Sugar Beach, and Madame President, a biography of Ellen Johnson Sirleaf. She was born in Monrovia, Liberia, and lives in the Washington, DC area.

"You must read Cooper's wildly tender memoir. It's that rarest of things, a personal story that transcends the people, the place, the world it is talking about and becomes a universal tale about the thousands of segregations, small and large, subtle and obvious, that shred all of us. It is beautifully written, utterly unself-conscious, and without a hint of self-pity. Cooper has an un-failing ear for language and a poet's tender heart. A powerful, important book that will teach you not only something about war and love, race and power, loss and hope, but also a great deal about yourself." -- Alexandra Fuller, author of Don't Let's Go to the Dogs Tonight: An African Childhood and The Legend of Colton H. Bryant

"Helene Cooper's memoir is a remarkable page-turner: gripping, perceptive, sometimes hilarious, and always moving. Her keen eye, fierce honesty, and incisive intelligence open a window on war-torn Liberia, America, and the stunning challenge of a life that straddles these deeply intertwined societies." -- Jeffrey D. Sachs, special adviser to UN Secretary-General Ban Ki-Moon and author of The End of Poverty

"The tragedy of Liberia -- the most American of all the African tragedies -- is brought painfully to life in Helene Cooper's memoir. Her work is an antidote to statistics and headlines and the blur of Africa's sorrows, a reminder that history and war proceed one family at a time, one person at a time. They are never abstract, always personal." -- Arthur Phillips, author of Prague, The Egyptologist, and Angelica

"Rendered with aching nostalgia and wonderful language -- is a voyage of return, through which the author seeks to recover the past and to find that missing sister, even as the war deepens over the years to come. Elegant and eloquent, and full of news from places about which we know too little." -- Kirkus (Starred review)

"Among Cooper's aims in becoming a journalist were to reveal the atrocities committed in her native country. With amazing forthrightness, she has done so, delivering an eloquent, if painful, history of the African migratory experience." -- Ms. Magazine

"There is tenderness in this memoir, and Cooper is clear-eyed even as she tells of her loss." -- The New Yorker

"Nearly three decades after fleeing Liberia, Cooper offers an indelible view of her homeland and makes palpable the pain that she felt when she lost it." -- People