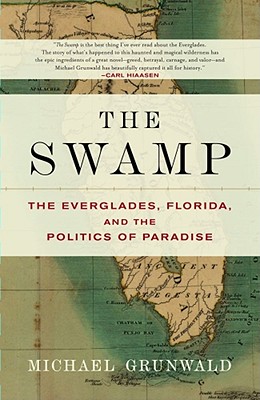 The Everglades in southern Florida were once reviled as a liquid wasteland, and Americans dreamed of draining it. Now it is revered as a national treasure, and Americans have launched the largest environmental project in history to try to save it.

The Swamp is the stunning story of the destruction and possible resurrection of the Everglades, the saga of man's abuse of nature in southern Florida and his unprecedented efforts to make amends. Michael Grunwald, a prize-winning national reporter for The Washington Post, takes readers on a riveting journey from the Ice Ages to the present, illuminating the natural, social and political history of one of America's most beguiling but least understood patches of land.

The Everglades was America's last frontier, a wild country long after the West was won. Grunwald chronicles how a series of visionaries tried to drain and “reclaim” it, and how Mother Nature refused to bend to their will; in the most harrowing tale, a 1928 hurricane drowned 2,500 people in the Everglades. But the Army Corps of Engineers finally tamed the beast with levees and canals, converting half the Everglades into sprawling suburbs and sugar plantations. And though the southern Everglades was preserved as a national park, it soon deteriorated into an ecological mess. The River of Grass stopped flowing, and 90 percent of its wading birds vanished.

Now America wants its swamp back. Grunwald shows how a new breed of visionaries transformed Everglades politics, producing the $8 billion rescue plan. That plan is already the blueprint for a new worldwide era of ecosystem restoration. And this book is a cautionary tale for that era. Through gripping narrative and dogged reporting, Grunwald shows how the Everglades is still threatened by the same hubris, greed and well-intentioned folly that led to its decline.

Michael Grunwald, a Time senior correspondent, has won the George Polk Award for national reporting, the Worth Bingham Award for investigative reporting, and many other prizes. The Washington Post called The Swamp, “a brilliant work of research and reportage.” He lives in Florida.

"This is a wonderfully written, provocative, and important book. It combines history and investigative journalism to explore not only the Everglades but the larger tensions of a society's relationship with the environment. It's also a riveting story, the definitive account of south Florida's incredible journey from marshland to man-made megalopolis."

-- John Barry, author of Rising Tide and The Great Influenza

"The Swamp is the best thing I've ever read about the Everglades. The story of what's happened to this haunted and magical wilderness has the epic ingredients of a great novel -- greed, betrayal, carnage, and valor -- and Michael Grunwald has beautifully captured it all for history."

Mr. Grunwald, a terrific writer, moves along at a cracking pace."

"A brilliant work of research and reportage."

"A superb narrative...Grunwald writes with verve and wit."

"The Swamp is a tremendous book -- impressive in scope, well researched and well written, rich in history yet urgently relevant to current events."

"Grunwald blends exhaustive research and superlative prose into a book as valuable as a week in Fort Lauderdale, at one-hundredth the price."