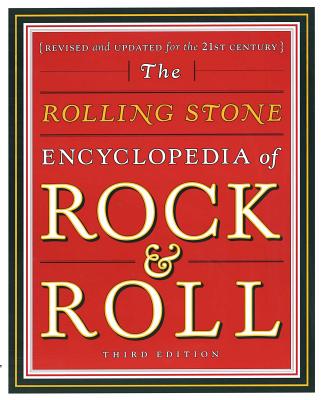 Completely updated with new entries and extensive revisions of the previous 1,800, The Rolling Stone Encyclopedia Of Rock & Roll is the authoritative volume on the world's music makers—from the one-hit wonders to the megastars.

In 1983, Rolling Stone Press introduced its first Rock & Roll Encyclopedia. Almost two decades later, it has become the premier guide to the history of rock & roll, and has been selected by the Rock and Roll Hall of Fame & Museum as its official source of information. Giving full coverage to all aspects of the rock scene, it tells the story of rock & roll in a clear and easy reference format, including complete discographies, personnel changes for every band, and backstage information like date and place of birth, from Elvis Presley to Eminem.

Since the last edition, the music scene has exploded in every area, from boy-bands to hip-hop, electronica to indie rock. Here, the Encyclopedia explores them all—'NSync, Notorious B.I.G., Ricky Martin, Radiohead, Britney Spears, Blink-182, Sean “Puffy” Combs, Portishead, Fatboy Slim, Fiona Apple, Lil' Kim, Limp Bizkit, Oasis, Outkast, Yo La Tengo, TLC, and many, many more. The Rolling Stone Encyclopedia of Rock & Roll, Third Edition includes all the facts, phenomena, and flukes that make up the history of rock. Accompanying the biographical and discographical information on the nearly 2,000 artists included in this edition are incisive essays that reveal the performers' musical influences, first breaks, and critical and commercial hits and misses, as well as evaluations of their place in rock history. Filled with hundreds of historical photos, The Rolling Stone Encyclopedia is more than just a reference book, it is the bible of rock & roll.