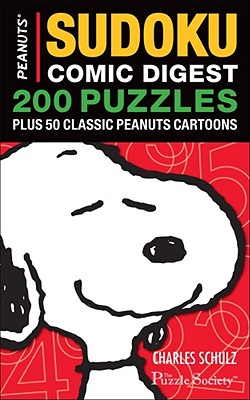 By Charles M. Schulz
$9.99
Email or call for price

* This fun-filled book combines the nation's most popular pastime, Sudoku, with the world's most beloved funny-page creation, Peanuts. * Peanuts Sudoku Comic Digest features 200 Sudoku puzzles divided into five difficulty levels presented alongside 50 cartoons that accent each brain-teasing tome. * Additional features include an illustrated how-to section and complete answer key. Charles Schulz created a cartooning legacy of legendary proportions. From 1950 to 2000, Schulz was the brain and the brawn behind 50 years of Peanuts comics. Today, this timeless strip appears in more than 2,400 newspapers in 75 countries in 25 languages. Additionally, the same ABC cartoon specials that first-generation Peanuts fans grew up with are now being shared with second- and third-generation fans seven times a year.

Charles Schulz is a legend. He was the hand and heart behind 50 years of "Peanuts," which featured one of the world's most beloved and recognizable cast of cartoon characters, until his death in 2000."