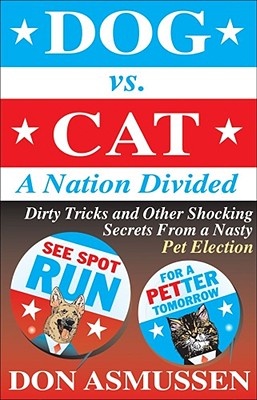 By Don Asmussen
for information about purchasing this book, please contact orders@bookpassage.com

It's been said politics makes for strange bedfellows. In this case, those fellows just happen to be furry. In Dog vs. Cat: A Nation Divided, cartoonist Don Asmussen creates a fun and fluffy mix of politics and pets that's outside the box. The litter box, that is.

It has become ever apparent in recent years that divisiveness is poisoning our national debate. Discussion and compromise have been replaced by name-calling, bullying, and veiled hate speech. Never in our history has our country been so fractured between these two groups . . . dog lovers and cat lovers.

Using metaphors from the political scene of both yesterday and today, Dog vs. Cat humorously parodies government silliness and squabbles through the eyes of a cartoon canine and kitty. Humorist Don Asmussen takes us behind the scenes for an investigative look at the controversial Spot vs. Mittens election-one that nearly scratched and clawed our country apart. The media gets accused of cat bias in its coverage of Mittens's affair with JenniPURR Flowers. Meanwhile, Spot's dog license is called into question at the Cat National Convention.

Perfect for the pet owner who keeps an eye on the political arena, Dog vs. Cat scoops the stories-and then the yard-of all the funny, quirky things that cat lovers, dog lovers, and elected humans can do, all in the name of creating a pet-ter tomorrow.

Don Asmussen was born in Rhode Island, a state so small that he didn't fit. So began a long journey through newspapers that included the Portland Press Herald, Detroit News, and San Diego Tribune. In 1997, he landed at the San Francisco Chronicle to write The San Francisco Comic Strip, a cartoon that trashed everyone but Don himself (he's sensitive to self-criticism). He also did a three-year stint as a Time magazine cartoonist. In 2003, he merged his cartooning craft with his bent for politics to create, Bad Reporter.