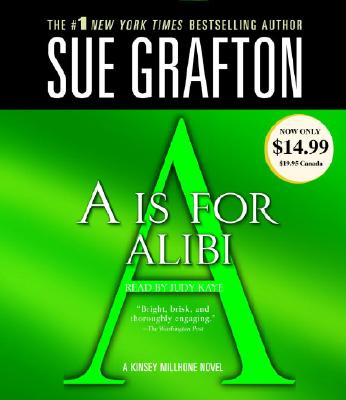 By Sue Grafton, Judy Kaye (Read by)
for information about purchasing this book, please contact orders@bookpassage.com

This is book number 1 in the A Kinsey Millhone Novel series.

Plenty of people in the picturesque town of Santa Teresa, California, wanted Laurence Fife, a ruthless divorce attorney, dead. Including, thought the cops, his young and beautiful wife, who was convicted of the crime.

Now, eight years later and out on parole, Nikki Fife hires Kinsey Millhone to find out who really killer her husband. Kinsey must pursue a trail that's eight years old: one that leads from a young boy, born deaf, whose memory cannot be trusted; to a lawyer defensively loyal to his dead partner - and disarmingly attractive to Millhone; to a not-so-young secretary with too high a salary for far too few skills.

This train will twist to include them all, with Kinsey following every turn until it finally twists back on itself and she fins herself face-to-face with a killer cunning enough to get away with murder.

Sue Grafton first introduced Kinsey Millhone in the Alphabet Series in 1982, and since then, both writer and heroine have become icons and international bestsellers. Grafton is a writer who consistently breaks the bonds of genre while never writing the same book twice. Named a Grand Master by the Mystery Writers of America, she has also received many other honors and awards, including the Lifetime Achievement Award from the Private Eye Writers of America, the Ross Macdonald Literary Award, the Cartier Diamond Dagger Award from Britain’s Crime Writers’ Association, the Lifetime Achievement Award from Malice Domestic, the Anthony Award given by Bouchercon, and three Shamus Awards. She lives in Montecito, California, and Louisville, Kentucky.

Judy Kaye received a Tony Award for her performance in The Phantom of the Opera and was nominated for two other Tony Awards: for her portrayal of Rosie in Mamma Mia, and her starring role as the singer Florence Foster Jenkins in Souvenir. She has performed with such opera companies and orchestras as the New York City Opera, the New York Philharmonic, and the London Symphony Orchestra.