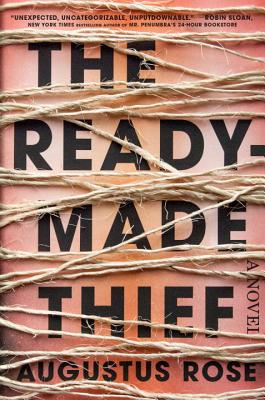 By Augustus Rose
for information about purchasing this book, please contact orders@bookpassage.com

“Much to the chagrin of my household, once I started this book I refused to put it down. I let my children fend for themselves while I walked along the Philly streets with Lee and Tomi, solving the age-old puzzle in the midst of which 17-year-old Lee has found herself. She has many of the same struggles and life choices to make as high school seniors across the country, but with a mysterious conspiracy thrown in. I love a book that is both well-written and completely absorbing. This is a great read for vacation, for a long plane ride, or for an escape while in the comfort of your own home.”
— Jessica Fowle, Bookbug, Kalamazoo, MI

“A story that starts out tracing a runaway turns into art history by way of the dark net. Combining unexpected genres and unforeseen twists in a highly original way, The Readymade Thief delights and entertains as well as informs. It circles the life and work of Marcel Duchamp, a French Dadaist famous for calling everyday objects (most notoriously a urinal) readymade art. It is not necessary to be familiar with Duchamp, but by the end you will want to read a biography and reread this book to discover how cleverly Rose includes references and puns referring to his work. The ending is perfect, which is all too rare in most fiction. This book is a literary delight.”
— Ann Carlson, Waterfront Books, Georgetown, SC

“The most must-read of all must-reads.” —Marie Claire

“A kickass debut from start to finish.” —Colson Whitehead, author of The Underground Railroad

Lee Cuddy is seventeen years old and on the run.

Betrayed by her family after taking the fall for a friend, Lee finds refuge in a cooperative of runaways holed up in an abandoned building they call the Crystal Castle. But the façade of the Castle conceals a far more sinister agenda, one hatched by a society of fanatical men set on decoding a series of powerful secrets hidden in plain sight. And they believe Lee holds the key to it all.

Aided by Tomi, a young hacker and artist with whom she has struck a wary alliance, Lee escapes into the unmapped corners of the city—empty aquariums, deserted motels, patrolled museums, and even the homes of vacationing families. But the deeper she goes underground, the more tightly she finds herself bound in the strange web she’s trying to elude. Desperate and out of options, Lee steps from the shadows to face who is after her—and why.

A novel of puzzles, conspiracies, secret societies, urban exploration, art history, and a singular, indomitable heroine, The Readymade Thief heralds the arrival of a spellbinding and original new talent in fiction.

Augustus Rose is a novelist and screenwriter. He was born in the northern California coastal town of Bolinas, and grew up there and in San Francisco. He lives in Chicago with his wife, the novelist Nami Mun and their son, and he teaches fiction writing at the University of Chicago.

Finalist for the 2017 Chicago Review of Books Award

“Anyone who became addicted to the rolling emotions, betrayals, and violent showdowns of Breaking Bad will be seduced by Augustus Rose’s debut . . . Fiendishly intricate and relentlessly suspenseful.”
—O, The Oprah Magazine

“A fast-paced adventure . . . as cleverly written as it is illuminating and deeply referential, and once you start we dare you to try to put it down.”
—Harper’s Bazaar

“This is one of those rare books that you can recommend to anyone you know, even that person who ‘doesn’t read.’ The most must-read of all must-reads.”
—Marie Claire

“First novels as rich and enchanting as Augustus Rose’s The Readymade Thief don’t come around too often, and when they do, they rarely combine secret societies, teenage runaways, and Marcel Duchamp.”
—Vanity Fair

“[A] viscerally and intellectually exciting novel . . . whose punning title indicates the layered complexity of this well-written text.”
—Wall Street Journal

“If you’re looking for an underrated debut that is as fast-paced and suspenseful as The DaVinci Code but way smarter, Augustus Rose’s novel will thrill you.”
—Vulture

“A fast-paced, plot-driven novel with a resolute heroine and a lot of history . . . Readers who enjoy literary puzzles, or who are looking for something a little different, should look no farther than The Readymade Thief.”
—Shelf Awareness

“Rewarding, like unearthing the Easter eggs in a Lynchian masterpiece.”
—Murder & Mayhem

“In his highly addictive and multi-faceted first novel, Augustus Rose pits an irrepressible and gritty young heroine against a sinister group of fanatics. The Readymade Thief is a kickass debut from start to finish.”
—Colson Whitehead, author of The Underground Railroad

“The Readymade Thief is my favorite kind of book: an improbable one. The novel is a map of things—urban exploration, secret societies, the city of Philadelphia, Marcel Duchamp, very possibly the Home Alone movies—and if those things don’t seem to fit together, well, that’s the magic of the improbable book, and the transmutation of obsessions, by energy and intellect, into something wholly new: a novel that’s unexpected, uncategorizable, unputdownable.”
—Robin Sloan, author of Mr. Penumbra’s 24-Hour Bookstore

“The Readymade Thief is a brilliant, suspenseful, and cinematic novel with an unforgettable heroine and a big story about art, the nature of consciousness, and all points in between. Be prepared to lose yourself in it.”
—Edan Lepucki, author of California and Woman No. 17

“I fell more than a little bit in love not just with Lee—the gutsy protagonist of Augustus Rose’s gorgeous debut novel, The Readymade Thief—but with the book itself. It’s a hypnotizing amalgamation of love story and mystery. I am in awe.”
—Hannah Pittard, author of Listen to Me

“In The Readymade Thief, Augustus Rose shows that he has one of the steadiest hands in fiction. How else to explain how effortlessly he complicates and expands the mystery at the heart of the novel, adding Marcel Duchamp, the Darknet, Urban Exploration, and a unified field theory along the way to such amazing effect. Each time I thought I had found my way to solid ground, another level opened up, and I eagerly tunneled deeper. Rose has crafted something memorable, crackling with energy, a truly wonderful tale.”
—Kevin Wilson, author of The Family Fang

“A rewarding novel full of pleasures and surprises. Every time I thought I knew where the story was going, it took me somewhere stranger and deeper than I could have imagined. A rich, heady mix of ideas and thrills.”
—Charles Yu, author of How to Live Safely in a Science Fictional Universe

“Complex on many intellectual levels, drawing heavily on theories of art history and physics, and the mystery is deep and satisfying in both its unpredictability and its culmination. The sheer scope is impressive, as are Rose's evocative descriptions of underground and abandoned places, reminiscent of David Lynch's films.”
—Kirkus Reviews

“A richly detailed intellectual thriller . . . Lee is an excellent character, and the many shadowy settings she travels through make for a fascinating vision of an alternate, underground Philadelphia.”
—Publishers Weekly