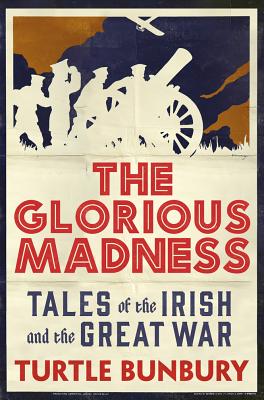 By Turtle Bunbury
$55.00
Email or call for price

Based on first-hand accounts of the First World War, The Glorious Madness brings to life the hopes, fears, and ambitions that defined Ireland's lost generation. From the dramatic story of the nuns of Ypres and their escape to Ireland to found Kylemore Abbey, to the multiple-escapist who became the one-legged nemesis of Michael Collins, and the five tragic, rugby-loving pals from the same Dublin team massacred at Gallipoli, these stories are by turns poignant, whimsical, and touching. This is history as it should be - free-wheeling and finely tuned to the rhythms of the human heart.

Turtle Bunbury is one of Ireland's most prolific and energetic historians. Having grown up surrounded by old family portraits and dusty books at Lisnavagh House, County Carlow, he studied history at Trinity College Dublin before moving to Hong Kong where he became a travel writer. Returning to Ireland some years later, he was determined to bring Irish history to life for all those who felt the past was just a tedious chronicle of dates, dates, dates. His quest has led him to a succession of fascinating book titles, including the highly acclaimed Vanishing Ireland series, as well as the History Festival of Ireland, which he co-founded. Turtle is a well-known name on Irish television and radio and a contributor to magazines such as The World of Interiors, Playboy, National Geographic Traveller. He is co-presenter of RTE's 'Genealogy Roadshow', and the founder of Wistorical, an innovative concept for promoting Irish history globally. Turtle lives in County Carlow with his wife, Ally, and their two daughters, Jemima Meike and Bay Hermione.