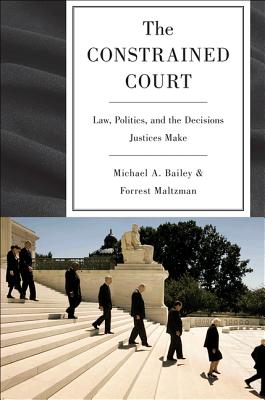 By Michael A. Bailey, Forrest Maltzman
$75.00
Email or call for price

How do Supreme Court justices decide their cases? Do they follow their policy preferences? Or are they constrained by the law and by other political actors? The Constrained Court combines new theoretical insights and extensive data analysis to show that law and politics together shape the behavior of justices on the Supreme Court.

Michael Bailey and Forrest Maltzman show how two types of constraints have influenced the decision making of the modern Court. First, Bailey and Maltzman document that important legal doctrines, such as respect for precedents, have influenced every justice since 1950. The authors find considerable variation in how these doctrines affect each justice, variation due in part to the differing experiences justices have brought to the bench. Second, Bailey and Maltzman show that justices are constrained by political factors. Justices are not isolated from what happens in the legislative and executive branches, and instead respond in predictable ways to changes in the preferences of Congress and the president.
The Constrained Court shatters the myth that justices are unconstrained actors who pursue their personal policy preferences at all costs. By showing how law and politics interact in the construction of American law, this book sheds new light on the unique role that the Supreme Court plays in the constitutional order.

Michael A. Bailey is the Colonel William J. Walsh Professor in the Department of Government and Institute for Public Policy at Georgetown University. Forrest Maltzman is professor of political science at George Washington University. He is the author of Competing Principals and the coauthor of Crafting Law on the Supreme Court and Advice and Dissent.