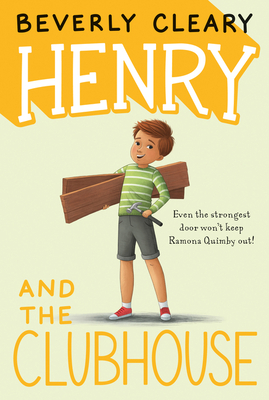 This is book number 5 in the Henry Huggins series.

Fiery Ramona Quimby and the well-meaning Henry Huggins may clash, but in this delightful and hilarious novel by Newbery Medal–winning author Beverly Cleary, it's an unlikely compromise that wins the day.

Henry and his friends are building a no-girls-allowed clubhouse. With a private space of their own, and a top-secret password required for entry, the boys are relieved to finally have a hang-out spot they don't have to share.

But Henry's about to find out that nothing—not even a sign—will keep gutsy Ramona out of their clubhouse…and her retaliation may just ruin Henry's newspaper career.

“Henry’s adventures in building a clubhouse and delivering the Journal to the 43 customers on his paper route are believable, funny, and easy to read.” — Chicago Tribune