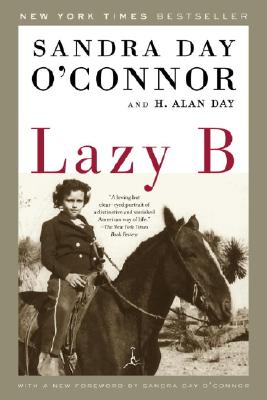 Now, for the first time in paperback, here is the remarkable story of Sandra Day O’Connor’s family and early life, her journey to adulthood in the American Southwest that helped make her the woman she is today—the first female justice of the U.S. Supreme Court, and one of the most powerful women in America. In this illuminating and unusual book, Sandra Day O’Connor tells, with her brother, Alan, the story of the Day family, and of growing up on the harsh yet beautiful land of the Lazy B ranch in Arizona.

Laced throughout these stories about three generations of the Day family, and everyday life on the Lazy B, are the lessons Sandra and Alan learned about the world, self-reliance, and survival, and how the land, people, and values of the Lazy B shaped them. This fascinating glimpse of life in the Southwest in the last century recounts an important time in American history, and provides an enduring portrait of an independent young woman on the brink of becoming one of the most prominent figures in America.

Sandra Day O'Connor was born in El Paso, Texas, and attended college and law school at Stanford University. She has been married to John O'Connor since 1952, and they have three sons. Nominated by President Reagan as associate justice of the United States Supreme Court, she took the oath of office on September 25, 1981, the first woman to do so.

H. Alan Day is a lifelong rancher who, after graduation from the University of Arizona, managed the Day ranch, the Lazy B, for thirty years. He also purchased and ran ranches in Nebraska and South Dakota, where he established a wild-horse sanctuary that, under contract with the U.S. government, cared for fifteen hundred wild horses. He lives in Tucson.

"It isn't necessary to have ever set foot on a ranch to savor O'Connor and Day's beautifully conveyed reminiscence about growing up on the same piece of land where their parents and grandparents had lived and worked. This is an endearing memoir about a vanishing era, a place and a family that nurtured the feisty young girl who became an extraordinary woman." -Doris Kearns Goodwin

"Sandra Day O'Connor and her brother, H. Alan Day, have taken all the themes of the conventional Western narrative-the roundup, the wild horses, the cattle and cattle stampedes, the rattlesnakes, the natural disasters like flash floods, and the colorful figures of cowboys-and transposed them from the usual narrative of the isolated, rootless male figure of the Western into the story of three generations of a family and their relationship to an arid and beautiful expanse of land on the border between Arizona and New Mexico. It's the story of what the land taught them and what it takes to survive under extremes of drought and distance. This is a book for every reader, whether interested in conservation, history, family dynamics, education, or just plain adventure."
-Jill Ker Conway

"There is a line in this book that says it all. 'The dust didn't settle on the ranch road for days after the wedding.' The wedding was that of Sandra Day O'Connor, and the road led to a ranch and a life called the Lazy B. This beautifully told story of the Lazy B will eventually settle on the reader and, like a magic dust of smiles and pleasures, stay there forever."
-Jim Lehrer