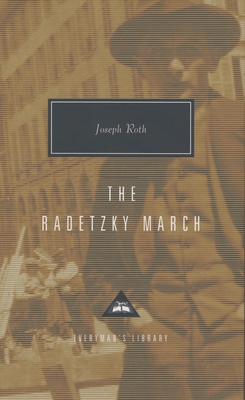 By Joseph Roth, Joachim Neugroschel (Translated by), Alan Bance (Introduction by)
for information about purchasing this book, please contact orders@bookpassage.com

By one of the most distinguished Austrian writers of our century, a portrait of three generations set against the panoramic background of the declining Austro-Hungarian Empire. Translated by a three-time winner of the PEN Translation Prize.

Joseph Roth was an Austrian novelist, essayist, journalist, and publisher who was born in 1894 and died in 1939. An outspoken critic of Hitler and militarism, he moved to Paris in 1933. Roth’s novels, though basically conservative, reflect political awareness and skepticism. His best-known novels are Job, concerning the struggle of Eastern European Jews, and The Radetzky March, written in 1933, which is an ironic portrait of the decline of the Austro-Hungarian Empire and is generally considered to be his masterpiece.

“One of the most readable, poignant, and superb novels in twentieth-century German: it stands with the best of Thomas Mann, Alfred Döblin, and Robert Musil. Roth was a cultural monument of Galician Jewry: ironic, compassionate, perfectly pitched to his catastrophic era.”
—HAROLD BLOOM

“A masterpiece . . . The totality of Joseph Roth's work is no less than a tragédie humaine
Achieved in the techniques of modern fiction.”
—NADINE GORDIMER

“Epic . . . brilliantly achieved . . . the portrait of an empty age, an age of gold braid and glitter.”
—THE NEW YORK TIMES

“It is hard to praise this novel sufficiently . . . [It] is exceptional for . . . the tolerance and pity and humorous magnanimity with which the author regards his characters.”
—CHRISTIAN SCIENCE MONITOR

With a new introduction by Alan Bance