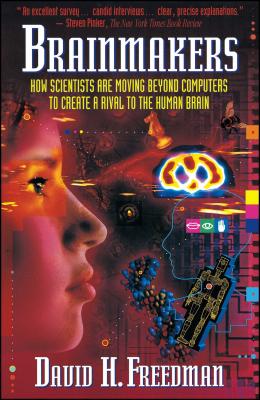 Join David Freedman as he takes you on a fascinating tour behind the scenes at laboratories around the world as top researchers race to create revolutionary "thinking machines" that may one day lead to a new form of intelligence.

The subject of fantasy and skepticism for centuries—from William James's mechanical bride to 2001's Hal to Star Wars' R2D2—artificial intelligence has been limited to number-crunching computers that are "smart" only in highly specific domains like chess—until now. Brainmakers is an eye-opening, mind-expanding, and mind-blowing journey through laboratories engaged in cutting-edge research into neuroscience and robotics. Inside, you'll discover:

MIT's Attila, a 3.6-pound, six-legged robot that learns as it interacts with its surroundings.

Japan's efforts to grow brain cells on chips and construct a "wiring diagram" of the human brain.

UCLA's "robot farm," where robots will be "bred" for intelligence.

In exciting yet accessible detail, Freedman shows how this research has moved into a new realm that transcends computer science, combining neuroscience, microbiology, evolutionary biology, and zoology. Modeled after natural rather than artificial intelligence, thinking machines may soon develop powers that rival—or exceed—those of the human brain.

David H. Freedman is a contributing editor for Inc. Magazine, and has written on science, business, and technology for The Atlantic, The New York Times, The Harvard Business Review, Fast Company, Science, Wired, and many other publications. His newest book, Wrong, about why experts keep failing us, came out in June, 2010. His last book (coauthored) was A Perfect Mess, about the useful role of disorder in daily life, business, and science. He is also the author of books about the US Marines, computer crime, and artificial intelligence. Freedman's blog, “Making Sense of Medicine,” takes a close, critical look at medical findings making current headlines with an eye to separating out the frequent hype. He lives near Boston.