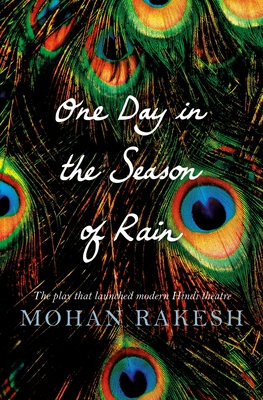 By Aparna Dharwadker
$22.95
Email or call for price

In a remote village in the foothills of the Himalayas, a gifted but unknown poet named Kalidas nurtures an unconventional romance with his youthful muse, Mallika. When the royal palace at Ujjayini offers him the position of court poet, Kalidas hesitates, but Mallika persuades him to leave for the distant city so that his talent may find recognition. Convinced that he will send for her, she waits. He returns years later, a broken man trying to reconnect with his past, only to discover that time has passed him by.

A classic of postcolonial theatre, Mohan Rakesh's Hindi play is both an unforgettable love story and a modernist reimagining of the life of India's greatest classical poet. It comes alive again in Aparna and Vinay Dharwadker's new English translation, authorized by the author's estate. This literary rendering is designed for performance on the contemporary cosmopolitan stage, and it is enriched by extensive commentary on the play's contexts, legacy, themes and dramaturgy.

Mohan Rakesh (Author)
MOHAN RAKESH (1925-1972) was a modernist innovator in Hindi who deeply influenced India's multilingual literary culture after Independence. His full-length plays-Ashadh ka ek din (1958), Lahron ke rajhans (1963) and Adhe adhure (1969)-became seminal works of urban drama and theatre, while his fiction sustained the 'new story' and 'new novel' movements nationally. Consolidated by four decades of posthumous publication, his prolific output as theatre theorist, literary and cultural critic, translator, travel writer, diarist and correspondent now positions him as a transformative figure in postcolonial literature worldwide.
APARNA DHARWADKER is professor of English and interdisciplinary theatre studies at the University of Wisconsin-Madison, and author of the prize-winning book Theatres of Independence: Drama, Theory, and Urban Performance in India since 1947 (2005).
VINAY DHARWADKER is professor of comparative literature at the University of Wisconsin-Madison, author of Kabir: The Weaver's Songs (2003) and an editor of The Oxford Anthology of Modern Indian Poetry (1994) and The Norton Anthology of World Literature (2012).