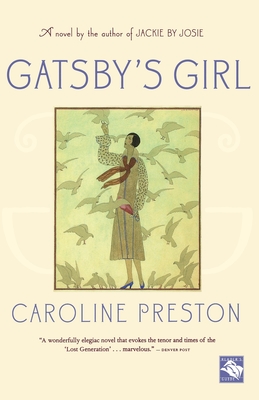 Just as Jay Gatsby was haunted by Daisy Buchanan in The Great Gatsby, F. Scott Fizgerald was haunted by his own great first love — a Chicago socialite named Ginevra. Alluring, capricious, and ultimately unavailable, she would become his first muse, the inspiration for such timeless characters as Gatsby's Daisy and Isabelle Borge in This Side of Paradise.

Caroline Preston's astute perceptions of her characters and the cultural landscapes they inhabit have earned her work comparisons to to that of Anne Tyler, Alison Lurie, and Diane Johnson. Now, in this richly imagined and ambitious novel, Preston deftly evokes the entire sweep of Ginevra's life — from her first meeting with Scott to the second act of her sometimes charmed, sometimes troubled life.

Ginevra was sixteen, a rich man’s daughter who had been told she was pretty far too often for her own good. Scott was nineteen, a poor boy full of ambition. They met at a country club dance in St. Paul, Minnesota, in January 1916. For almost a year they wrote each other letters — so long, breathless, and yearning that they often required more than one envelope.

But despite their intense epistolary romance, the relationship wouldn’t last. After throwing him over with what he deemed “supreme boredom and indifference,” she impulsively married a handsome aviator from the right society background.

Ruminating over what might have been had she picked the writer instead of the flier, she furtively reads the now famous Fitzgerald’s work. When she sees herself — much to her surprise — in his characters, it’s not just as the spoiled debutante he’d known; he’s also uncannily predicted the woman she’s become, cracks and all.

An affecting story of two people, one famous, one known only through her portrayals in enduring works of fiction, Gatsby’s Girl is a tremendously entertaining and moving novel about the powerful forces of first love, memory, and art.

CAROLINE PRESTON is a graduate of Dartmouth College and earned her master’s degree in American civilization at Brown University. She has worked as a manuscript librarian, both at the Houghton Library at Harvard and the Peabody Essex Museum in Salem, Massachusetts. She is the author of two previous novels, Jackie by Josie (a New York Times Notable Book of the Year) and Lucy Crocker 2.0. She is married to the writer Christopher Tilghman, and they live with their three sons in Charlottesville, Virginia.