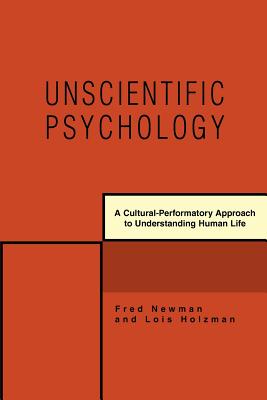 Philosopher and psychotherapist Fred Newman and developmental psychologist Lois Holzman challenge psychology's understandings of what a human being is, what mental illness is, and how people develop and learn. They show how these understandings were created, marketed and sold to the American public. Going beyond critique, the authors argue that instead of psychology, what people the world over need is a cultural, performatory approach to human life. Unscientific Psychology is based on the authors' twenty-five year practice of creating such an approach and the network of therapeutic and educational projects that have been built with it.

Unscientific Psychology is at once a narrative of the history of philosophy, modern science and psychology, and a critique of psychology's methodology. Arguing that psychology is a pseudoscientific hoax, the authors deconstruct three of its most powerful myths: the myth of the individual; the myth of mental illness; and the myth of development. They tell the story of how these myths were constructed out of age-old philosophical abstractions to create a world and a discourse of psychological objects.

Newman and Holzman invite readers to think in new ways about our lives and the world around us. Like similar books that make discoveries in the social sciences accessible and exciting to an educated audience, Unscientific Psychology taps into the desire of readers who are eager to learn what's on the cutting edge of scientific and cultural change.