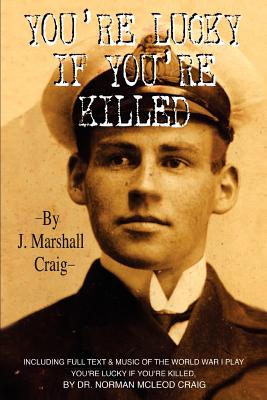 Fergus, Ontario-born medical student Norman Craig wasn't yet 20 when he went to Egypt in 1915 with the Royal Army Medical Corps. He soon transferred, however, to the Royal Naval Air Service, finishing the war as a flight commander, leading a squadron of Sopwith Camels stationed in Mudros. By war's end, most of his boyhood friends had been killed. In 1932, after the town council he described as "a group of unreasoning pacifists" had again put off the construction of a war memorial in Fergus, Craig took matters into his own hands. He wrote You're Lucky If You're Killed, and produced it in June, 1933, using a local cast and crew. It took another two years but finally came Craig's Dawn Parade unveiling the monument--which represents "any small town in Canada."

The play itself--one of Canada's first--has never been seen again, despite some attempts in the early 1950s to resurrect & publish the work. Craig wanted people to remember the war dead, not his own actions, which he described as a "a small, overdue payment on a large debt."

In this book, Dr. Craig's grandson--a Hollywood-based writer and film director--makes public for the first time in 70 years the original text &music of the play, as well as an overview of the events that sparked its creation.