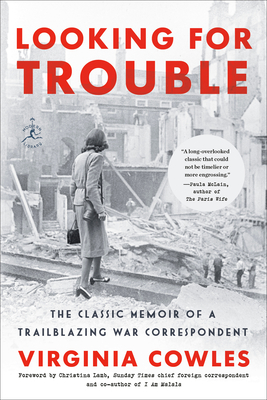 “A long-overlooked classic that could not be timelier or more engrossing.”—Paula McLain, author of The Paris Wife

Foreword by Christina Lamb, Sunday Times chief foreign correspondent and co-author of I Am Malala

Virginia Cowles was just twenty-seven years old when she decided to transform herself from a society columnist into a foreign press correspondent. Looking for Trouble is the story of this evolution, as Cowles reports from both sides of the Spanish Civil War, London on the first day of the Blitz, Nazi-run Munich, and Finland’s bitter, bloody resistance to the Russian invasion. Along the way, Cowles also meets Adolf Hitler (“an inconspicuous little man”), Benito Mussolini, Winston Churchill, Martha Gellhorn, and Ernest Hemingway. Her reportage blends sharp political analysis with a gossip columnist’s chatty approachability and a novelist’s empathy.

Cowles understood in 1937—long before even the average politician—that Fascism in Europe was a threat to democracy everywhere. Her insights on extremism are as piercing and relevant today as they were eighty years ago.

Virginia Cowles, OBE, was born in Vermont in 1910. She gravitated to journalism in her youth, beginning as a society reporter for Harper’s Bazaar before pitching the idea of a travel column to Hearst Magazines, which she successfully transformed into a foreign press correspondent role when she began covering the Spanish Civil War in 1937. She later reported from North Africa as the special assistant to the American ambassador. Cowles died in France in 1983.

“Virginia Cowles went looking for trouble, and did she find it. . . . Her beauty, savvy and sheer impudence regularly got her to places no other woman reporter of the time could reach. . . . A tour-de-force.”—Daily Mail

“[Virginia] Cowles was not only a doggedly ambitious reporter but one whose glamour facilitated unique access to her subjects. . . . Looking for Trouble is a rollicking thriller of a memoir.”—The Wall Street Journal

“In all its diverse richness of drama and compassion and penetration and wit [Looking for Trouble] shows us the relentless progress of tragically integrated events, in a world where democratic civilization itself was fatally ‘looking for trouble’ by trying with all its might to look the other way.”—The New York Times Book Review

“One of the truly great war correspondents of all time.”—Antony Beevor, New York Times bestselling author of Stalingrad and Berlin

“A society gossip columnist who arrived at her first front in heels and fur, Ginny Cowles would become, like her friend and sister in arms Martha Gellhorn, one of the most penetrating and effective war correspondents of all time. With its bold, unforgettable voice, and insight into ordinary people in peril—the ‘tragedy of smashed lives’—Looking for Trouble is a long-overlooked classic that could not be timelier or more engrossing.”—Paula McLain, author of The Paris Wife and When the Stars Go Dark

“Reading this book. . . I was blown away. . . . Cowles’s encounters with all the key players have led some to describe her as the Forrest Gump of journalism. . . . Indeed, her own story was as remarkable as the subjects she covered. . . . If today there are almost as many women as men reporting from war zones, it is thanks to women like Cowles, who showed what is possible. It’s a mystery to me that she doesn’t receive the same recognition as [Martha] Gellhorn. Looking for Trouble was a bestseller when it was published in 1941, and I hope that its re-release will introduce her to a whole new generation.”—Christina Lamb, Sunday Times chief foreign correspondent and co-author of I Am Malala, from her foreword