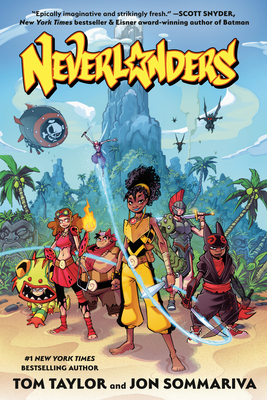 Bee and her fellow runaways are their own found family. So when a stranger named Paco saves her life, Bee invites him to join their crew, thinking he’s another lost teen. Someone else the world has overlooked. The truth is Paco’s not just a lost teen, he’s a Lost Boy from Neverland. And he needs Bee and the others to come back with him.

When the group is then spirited away by a foul-mouthed Tinker Bell, they discover that Neverland is not some fun-filled hideaway. It's a war zone under siege by a horde of pirates with a merciless new leader who will stop at nothing to steal the land’s magic. Tink leads a fairy army that barely holds them at bay. Peter Pan is gone. And rest of the Lost Boys have been killed. Paco is all that remains . . . but he hopes that this group of teens will become the new Lost Ones. These young runaways may be Neverland’s only hope—but they’re about to learn that it’ll take a lot more than happy thoughts to win a war.

Tom Taylor is a #1 New York Times bestselling and award-winning author, BAFTA-nominated screenwriter, and GLAAD Award nominee. He’s written for DCeased, Suicide Squad, Spider-Man, X-Men, and more. His comics have sold over 8 million copies in the US—and over 10 million globally. He is also the co-creator, executive producer, and lead writer of the animated series the Deep, which is based on his graphic novels and can be seen in over 140 countries. He lives with his family in Australia, but you can visit him at tomtaylormade.com or follow him on Twitter, Instagram, and Facebook @TomTaylorMade.


Jon Sommariva (also known as Red J) has been the artist for such bestselling comics as Batman, the Teenage Mutant Ninja Turtles, Star Wars, and the Avengers, and he's sold well over a million copies of his comics. He lives with his family in Australia, but you can follow him @sommariva on Instagram and @JonSommariva on Twitter.

"Neverlanders is fantastic and gorgeous! Action-packed, quirky, and full of heart—a modern reimagining of Peter Pan that combines the fantasy, adventure, and whimsy of the original classic with lush artwork, witty dialogue, and a diverse new cast of characters you can’t help but fall in love with." —Kami Garcia, #1 New York Times bestselling author of Teen Titans: Raven and coauthor of the Beautiful Creatures series

“With Neverlanders, Tom Taylor and Jon Sommariva re-invent the Neverland mythology for a new generation—an epically imaginative and strikingly fresh take on all things Lost Boys. Filled with foul-mouthed fairies, steampunk goblins, and a healthy dose of pixie dust, Neverlanders is the perfect book for anyone young at heart.” —Scott Snyder, #1 New York Times bestseller & Eisner award-winning author of Batman and American Vampire

"This fierce new Neverland, where a group of teens can be more powerful than they ever imagined, is beautifully brought to life by Taylor and Sommariva. It made me want to stay forever and never grow up." —Danielle Paige, New York Times bestselling author of the Dorothy Must Die series

"A bright and vibrant adventure: Taylor and Sommariva have given us a Neverland transformed to new heights of possibility." —Ryan North, New York Times bestseller & Eisner award-winning author of The Unbeatable Squirrel Girl

"The work of a master at the height of his craft. There is no one out there right now doing it like Tom Taylor. NO ONE." —Jay Kristoff, New York Times bestselling author of Empire of the Vampire and The Nevernight Chronicle, and co-author of The Illuminae Files

"Stunning visuals and an unforgettable story, with fiercely modern themes and a found family that will steal your heart. Full of charm, intensity, and wonder, this is Neverland like you’ve never seen it before." —C.S. Pacat, New York Times bestselling author of Dark Rise and the Captive Prince trilogy