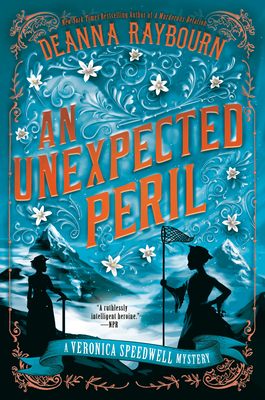 This is book number 6 in the A Veronica Speedwell Mystery series.

A princess is missing and a peace treaty is on the verge of collapse in this new Veronica Speedwell adventure from the New York Times bestselling and Edgar Award-nominated author Deanna Raybourn.

January 1889. As the newest member of the Curiosity Club--an elite society of brilliant, intrepid women--Veronica Speedwell is excited to put her many skills to good use. As she assembles a memorial exhibition for pioneering mountain climber Alice Baker-Greene, Veronica discovers evidence that the recent death was not a tragic climbing accident but murder. Veronica and her natural historian beau, Stoker, tell the patron of the exhibit, Princess Gisela of Alpenwald, of their findings. With Europe on the verge of war, Gisela's chancellor, Count von Rechstein, does not want to make waves--and before Veronica and Stoker can figure out their next move, the princess disappears.

Having noted Veronica's resemblance to the princess, von Rechstein begs her to pose as Gisela for the sake of the peace treaty that brought the princess to England. Veronica reluctantly agrees to the scheme. She and Stoker must work together to keep the treaty intact while navigating unwelcome advances, assassination attempts, and Veronica's own family--the royalty who has never claimed her.

Praise for An Unexpected Peril

“Fans of feisty Victorian heroines will hope Veronica has a long career.”--Publishers Weekly

“Raybourn has again crafted a delightful mystery that balances Veronica’s growth and maturity with her undeterrable, adventurous spirit.”--Booklist

“The perfect blend of action, romance and mystery.”--BookPage

Praise for the Veronica Speedwell Mysteries

"[A] ruthlessly intelligent heroine....You'll be eagerly awaiting the next book in the series."--NPR

"Intelligent, highly adventurous and independent, Speedwell challenges the conventions of the Victorian era, and her curiosity and charm make her a unique and highly likeable heroine."--She Reads

"I love this series! Veronica Speedwell is utterly unique....The plots are clever and fast-paced."--Amanda Quick, New York Times bestselling author of Close Up

"Veronica Speedwell might just be one of the most endearing heroines in mysteries, period....Her sense of humor and chemistry with Stoker, her counterpart, just make this series even better."--Bustle