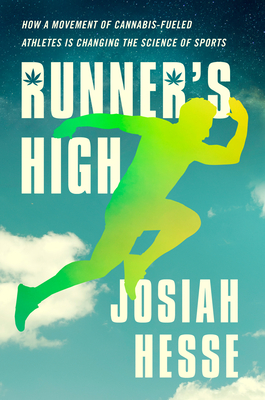 Michael Pollan's How to Change Your Mind meets Christopher McDougall's Born to Run in this immersive, investigative look at the hidden culture of cannabis use among elite athletes (as well as weekend warriors)--and the surprising emerging science behind the elusive, exhilarating "runner's high" they all seek.


Pot makes exercise fun. The link between performance enhancement and cannabis has been an open secret for many years, so much so that with the wide-sweeping national legalization of cannabis, combining weed and working out has become the hottest new wellness trend.

Why, then, is there still a skewed perception around this leafy substance that it only produces the lazy, red-eyed stoner laid out on a couch somewhere, munching on junk food? In fact, scientists have conducted extensive research that uncovers the power of the "runner's high"--the true holy grail of aerobic activity that was long believed to be caused by endorphins. In an extraordinary reversal, scientists believe marijuana may actually be the key to getting more Americans off their phones and on to their feet.

In Runner's High, seasoned investigative journalist Josiah Hesse takes readers on a journey through the secret world of stoned athletes, describing astounding, cannabis-inspired physical and mental transformations, just like he experienced. From the economics of the $20 billion CBD market to the inherent inequalities in the enforcement of marijuana prohibition; from the mind-body connection behind the "runner's high" to the best way to make your own cannabis-infused power bars; Runner's High takes this groundbreaking science out of the lab and onto the trail, court, field, and pitch, fundamentally changing the way we think about exercise, recovery, and cannabis.

Josiah Hesse is an investigative journalist who covers breaking marijuana news as well as the intersection of marijuana and athletics, politics, economics, and culture. He has written for publications including Vice, The Guardian, Politico, and Esquire, and for cannabis-specific outlets such as Ganjapreneur, High Times, Big Buds, The Fix, The Cannabist, and many more. He lives in Denver, Colorado.

“A stimulating survey of recent changing attitudes toward cannabis use in athletics . . . Hesse is at his best explaining the hypocrisy of criminalizing pot—while other potentially dangerous substances are legal—and how to use it responsibly. This enlightening deep-dive into the benefits of lighting up may even win over skeptics.” –Publishers Weekly

“[A] work of advocacy…An eye-opening and potentially mind-expanding read for runners and stoners alike, not to mention the culturally curious.” –Kirkus Reviews

“Masterful. . . A groundbreaking book on a cultural change that offers a perspective shift on exercising in general and an invitation to come out of the cannabis closet.” –Booklist

“Josiah Hesse has made a career of studying evolving subcultures — and his latest is still very much evolving. Runners High takes a nonfiction approach to the subject of cannabis and exercise, and the hidden culture of elite athletes who mingle them. Hesse, who credits weed for helping him become a long-distance runner, delves into the growing research and debates around the subject.” --Denver Post

“Runner's High, inspired by Michael Pollan’s narrative-driven science writing and Christopher McDougall’s Born to Run, digs into how athletes are using cannabis, the science behind the drug and the body’s response to exercise, the regulation of marijuana in sports, and the cultural assumptions about both athletes and cannabis users. Driven by his own stories and those of dozens of athletes plus plenty of science, he makes a compelling case for why cannabis makes exercise fun.” --Westword

“Runner’s High is passionate and insightful.” –Kansas City’s The Pitch

"Endurance athletes have long known that the secret to excellence lies in finding joy in their effort. It just so happens that a little weed can turn a slog into pleasure. In his gonzo exploration of weed and athletics, Runner's High, Josiah Hesse illuminates a sub-culture of stoned runners who are outperforming their square peers, recovering faster, and managing chronic illness with the power of cannabis. If this book doesn't want you to take a pot gummy and head out on the trails, nothing will." –Scott Carney, author of What Doesn't Kill Us

“Bravo, Josiah Hesse, for writing such a readable, science-based, and enlightening book. Runner’s High clearly dispels the myth of cannabis as a performance-enhancing drug, while revealing its widespread use among elite athletes, simply because it makes exercise more fun! I really enjoyed the book.” –Dr. Rav Ivker, author of Cannabis for Chronic Pain

"It's past time for runners to be more open-minded about cannabis. Josiah has written a fun, informative insider's guide to the whys and hows of the topic. Highly recommended." –Scott Douglas, contributing writer for Runner's World and author of The Athlete's Guide to CBD

“Thank god for this book.” –Jessamyn Stanley, author of Every Body Yoga and Yoke

"The trend of fusing cannabis with fitness has been insanely popular for years. It's high time someone wrote a book about it, and Josiah Hesse is the guy for the job." –Avery Collins, top-ranked ultramarathoner

"Hesse is an earnest and authentic human being who writes well about what he knows with a passion that makes me envious. If I'm writing about the marijuana beat he'd be on my call list for sure." –Corey Hutchins, Colorado journalism reporter for Columbia Journalism Review