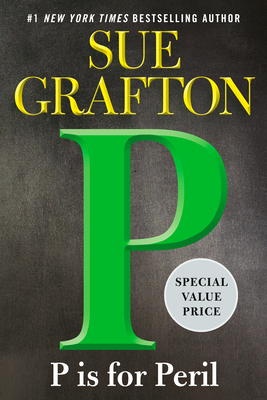 This is book number 16 in the A Kinsey Millhone Novel series.

Private investigator Kinsey Millhone gets entangled in a minefield of a missing persons case in this thriller that “crackles with suspense and pops with surprises” (Newsday).

Kinsey Millhone never sees it coming. She is mired in the case of a doctor who disappeared, his angry ex-wife, and beautiful current one-a case that is full of unfinished business, unfinished homes, and people drifting in and out of their own lives. Then Kinsey gets a shock. A man she finds attractive is hiding a fatal secret—and now a whole lot of beauty, money, and lies are proving to be a fatal distraction from what Kinsey should have seen all along: a killer standing right before her eyes...

Praise for P is for Peril

“Grafton writes with assurance, and her ability to mix this stew of self-important medical people, rebellious teens, and good-natured neighbors speaks to her ability to create a satisfyin read.”—Boston Globe

“Grafton cooks up scenarios that get your wheels turning...She'll see to it that you’re up half the night reading to the end.”—San Francisco Chronicle

“Sharp-eyed and sharp-tongued [Kinsey Millhone] is as capable and acerbic as ever.”—The Wall Street Journal

“Engrossing...If you haven't tried [Grafton] yet, you're missing a sterling example of the mystery riter's craft at its low-key, discuplined best.”—Entertainment Weekly