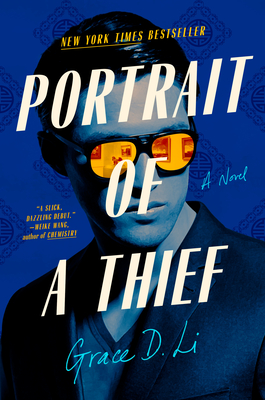 "The thefts are engaging and surprising, and the narrative brims with international intrigue. Li, however, has delivered more than a straight thriller here, especially in the parts that depict the despair Will and his pals feel at being displaced, overlooked, underestimated, and discriminated against. This is as much a novel as a reckoning."
—New York Times Book Review

Ocean's Eleven meets The Farewell in Portrait of a Thief, a lush, lyrical heist novel inspired by the true story of Chinese art vanishing from Western museums; about diaspora, the colonization of art, and the complexity of the Chinese American identity

History is told by the conquerors. Across the Western world, museums display the spoils of war, of conquest, of colonialism: priceless pieces of art looted from other countries, kept even now.

Will Chen plans to steal them back.

A senior at Harvard, Will fits comfortably in his carefully curated roles: a perfect student, an art history major and sometimes artist, the eldest son who has always been his parents' American Dream. But when a mysterious Chinese benefactor reaches out with an impossible—and illegal—job offer, Will finds himself something else as well: the leader of a heist to steal back five priceless Chinese sculptures, looted from Beijing centuries ago.

His crew is every heist archetype one can imag­ine—or at least, the closest he can get. A con artist: Irene Chen, a public policy major at Duke who can talk her way out of anything. A thief: Daniel Liang, a premed student with steady hands just as capable of lockpicking as suturing. A getaway driver: Lily Wu, an engineering major who races cars in her free time. A hacker: Alex Huang, an MIT dropout turned Silicon Valley software engineer. Each member of his crew has their own complicated relationship with China and the identity they've cultivated as Chinese Americans, but when Will asks, none of them can turn him down.

Because if they succeed? They earn fifty million dollars—and a chance to make history. But if they fail, it will mean not just the loss of everything they've dreamed for themselves but yet another thwarted at­tempt to take back what colonialism has stolen.

Equal parts beautiful, thoughtful, and thrilling, Portrait of a Thief is a cultural heist and an examination of Chinese American identity, as well as a necessary cri­tique of the lingering effects of colonialism.

Grace D. Li grew up in Pearland, Texas, and is a graduate of Duke University, where she studied biology and creative writing. Her debut novel, Portrait of a Thief, was an instant New York Times bestseller, USA Today bestseller, and #1 international bestseller. She currently attends medical school at Stanford University. Say hi on social media @gracedli or sign up for updates at www.gracedli.com.

Praise for Portrait of a Thief

“A number of heist and con artist novels published this year grappled with larger socioeconomic and racial injustice. The best and most entertaining of these was Grace D. Li’s debut, Portrait of a Thief, which juxtaposes thrilling international antiquities heists against a layered examination of what it is to be displaced, overlooked and underestimated.”
—New York Times, Best Crime Novels of 2022

"The thefts are engaging and surprising, and the narrative brims with international intrigue. Li, however, has delivered more than a straight thriller here, especially in the parts that depict the despair Will and his pals feel at being displaced, overlooked, underestimated and discriminated against. This is as much a novel as a reckoning."
—New York Times Book Review

"A heist caper...that turns on breakneck action, fast cars and a thoughtful exploration of Western colonialism and the complexities of Chinese diaspora identities."
—Los Angeles Times

"With the glitz of “Crazy Rich Asians” and the suspense of “Ocean’s Eleven,” Li’s debut is a fast-paced heist novel with the attendant glamour of priceless artifacts and a $50 million dollar payout. It also asks tough questions about cultural appropriation."
—Washington Post

"In Portrait of a Thief, Li invites readersalong for a ride in the crew’s roving getaway car, promising breathtaking vistas and,more importantly, a reckoning with colonial legacies that have long lingered in theshadows."
—Boston Globe

"This clever debut is an absolutely thrilling ride from start to finish."
—Buzzfeed News

“A tender and tenacious art-heist story wrapped around an intimate cultural history of extraction, Portrait of a Thief is a novel that names the unsutured wounds left by the violence of immigration, xenophobia, and diasporic longing in the lives of its Asian American characters, a story of the comradery of resistance and a testament to righteous grievance.”
—Vulture

"You are going to want in on this one."
—E! Online

"Portrait of a Thief manages to be both a gripping thriller and thoughtful exploration of Chinese American identity."
—Business Insider

“A high wire act...by turns purposive and poignant, this complex and multilayered novel is a stunner.”
—The Fredricksburg Free Lance-Star

"Full of schemes, dreams, intrigue, chases, and the thrill of the steal, Portrait of a Thief also asks larger questions about cultural identity, repatriation, and the colonization of art. It’s a thoroughly entertaining read, which is why it’s not surprising that it’s soon to be a Netflix series."
—Al Woodworth, Amazon Editor

"Portrait Of a Thief is the heist novel art history majors have been waiting for."
—The Millions

"Portrait of a Thief is that rare, perfectly executed heist that reminds us why we love to pair art and crime."
—CrimeReads

“Portrait of a Thief is a confident debut for Li, whose writing shows great control at the line level and of the overall narrative. Descriptions are both economic and poetic; the novel keeps a swift pace as the characters crisscross the world, from the American South to the San Francisco Bay Area, to Beijing and Europe. It’s easy to see why Netflix was so quick to nab TV rights for the book."
—KQED

"[Li's] novel is seductive, drawing readers in with tales of beautiful people, expensive art and first-class flights. But beneath the glitz, this is a story of desire and youth; the responsibility to honor parents’ struggles and make parents’ sacrifices worthwhile; and the qualms of college students on the precipice of the real world, searching for a path that will fulfill them..."
—The Stanford Daily

"This is an entertaining read that has fun with familiar ideas while still managing to give them interesting twists."
—BookRiot

“A cinematic heist thriller with a social conscience…vivid and precisely crafted.”
—BookPage

"Grace D. Li is a virtuosic storyteller, and Portrait of a Thief is the most exciting debut I’ve read this year. A thrilling art heist that grapples with the complexities of cultural identity and repatriation, Li’s novel is an intelligent page-turner that will keep you hooked until the very end."
—Lauren Wilkinson, New York Times bestselling author of American Spy

"In this slick, dazzling, debut, the stakes are high and the writing elegant. Here’s a story that offers not just adventure or a reprieve from the everyday, but big dreams, big hearts, enduring friendships, and the multitudes of identities that can exist within each one of us."
—Weike Wang, author of Chemistry

"This is the heist novel we deserve. Brilliantly twisty and yet so contemplative, with characters whose complicated backgrounds color their every move, this book will continue to haunt you long after you’ve reached the end."
—Jesse Q. Sutanto, author of Dial A for Aunties

"Grace Li’s thrilling debut, Portrait of a Thief, is a beautiful examination of identity as children of the diaspora. Through Will, Irene, Daniel, Lily, and Alex, we see their struggles to connect with the land of their parents conflicting with what it means to be Asian American. This fast-paced heist leaves you clutching the pages and rooting for the thieves."
—Roselle Lim, author of Natalie Tan's Book of Luck and Fortune

“A lyrical and action-packed tale of yearning, connection, self-discovery, and righting wrongs, Portrait of a Thief is a unique vision of what it means to come home."
—Delilah S. Dawson, New York Times bestselling author of The Violence

“Portrait of a Thief was everything I imagined and more. The writing felt close and intimate and the characters felt like portraits themselves, bursting with life and delicately human.”
—Morgan Rogers, author of Honey Girl

"Portrait of a Thief is a fun, frenetic heist novel... Amid the heists, though, we watch these characters grapple with the weight of expectation specific to being part of immigrant families, and the unmoored loneliness of not feeling Chinese enough or American enough. Although the genre is a familiar one, Li establishes the stakes in a way that feels more relatable than stealing a necklace at the Met Gala ever could."
—NPR

“An impressive 2022 debut novel in which a team of thieves plot to steal five priceless sculptures from ancient China from five world museums, returning them to their homeland — and earning $50 million in the process. The twist: the thieves are all brilliant, young high-achieving Chinese Americans, working out their own complicated feelings toward China. Li has fun with the clock-ticking conventions of heist drama (she notes in her acknowledgments that the “Ocean’s Eleven” movie franchise, among others, was an inspiration), and along the way makes some poignant statements about identity and privilege.” —The Seattle Times