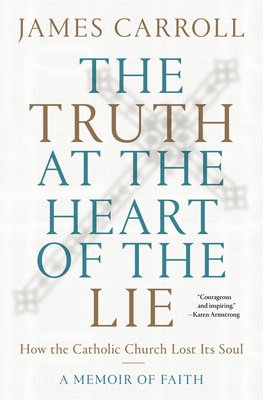 “Courageous and inspiring.”—Karen Armstrong, author of The Case for God

“James Carroll takes us to the heart of one of the great crises of our times.”—Stephen Greenblatt, author of The Swerve

An eloquent memoir by a former priest and National Book Award–winning writer who traces the roots of the Catholic sexual abuse scandal back to the power structure of the Church itself, as he explores his own crisis of faith and journey to renewal

James Carroll weaves together the story of his quest to understand his personal beliefs and his relationship to the Catholic Church with the history of the Church itself. From his first awakening of faith as a boy to his gradual disillusionment as a Catholic, Carroll offers a razor-sharp examination both of himself and of how the Church became an institution that places power and dominance over people through an all-male clergy.

Carroll argues that a male-supremacist clericalism is both the root cause and the ongoing enabler of the sexual abuse crisis. The power structure of clericalism poses an existential threat to the Church and compromises the ability of even a progressive pope like Pope Francis to advance change in an institution accountable only to itself. Carroll traces this dilemma back to the Roman Empire and the Middle Ages, when Scripture, Jesus Christ, and His teachings were reinterpreted as the Church became an empire. In a deeply personal re-examination of self, Carroll grapples with his own feelings of being chosen, his experiences as a priest, and the moments of doubt that made him leave the priesthood and embark on a long personal journey toward renewal—including his tenure as an op-ed columnist at The Boston Globe writing about sexual abuse in the Church.

Ultimately, Carroll calls on the Church and all reform-minded Catholics to revive the culture from within by embracing anti-clerical, anti-misogynist resistance and staying grounded in the spirit of love that is the essential truth at the heart of Christian belief and Christian life.

James Carroll served as Catholic chaplain at Boston University from 1969 to 1974. He left the priesthood to become a writer, and for twenty-three years he wrote a weekly op-ed column for The Boston Globe. He has written twelve novels and nine works of nonfiction, including his memoir An American Requiem, winner of the National Book Award; Constantine’s Sword, a New York Times bestseller and winner of the National Jewish Book Award; and a history of the Pentagon, House of War, winner of the PEN/Galbraith Award. Carroll is a fellow of the American Academy of Arts and Sciences. He lives in Boston with his wife, the writer Alexandra Marshall.

“James Carroll’s The Truth at the Heart of the Lie is at once a passionate love letter to the enduring beauty of the Catholic faith and a passionate indictment of the clericalism of the Catholic Church. This moving and revelatory book, written from deep personal experience, takes us to the heart of one of the great institutional and existential crises of our times.”—Stephen Greenblatt, author of The Swerve

“James Carroll has written a courageous and inspiring account of his original commitment to and his subsequent disillusion with the Catholic Church. Our only hope is to have the courage to imagine a future that returns to the spirit of equity, love, and compassion that not only is fundamental to the true teaching of the Catholic Church but also lies at the heart of all the great world religions.”—Karen Armstrong, author of The Case for God

“In this amazing account of the author’s lifelong adventure of faith, full of candor and pain about one man’s encounter with the peculiar blessings and severe limitations of Catholic Christianity, the reader will come to know a man of such intellectual breadth and astonishing self-honesty as one almost never encounters in contemporary literature.”—Thomas Cahill, author of How the Irish Saved Civilization

“James Carroll has been extending his life story and his critique of the Catholic Church in tandem for a generation. The Truth at the Heart of the Lie brings that turbulent dialogue to a moving and gripping conclusion, a repentant Catholic’s manifesto and culminating apologia pro vita sua. Prepare to race through it at one sitting—and then live with it.”—Jack Miles, author of God: A Biography

“In The Truth at the Heart of the Lie, James Carroll bares his Catholic soul—and the soul of his church. Both wounded and redeemed by the faith of his Irish American family, Carroll peers, with undaunted courage, into the shadows of deceit and corruption that have shaken his soul’s confidence. In that darkness, he discovers the truth hidden in the human failings, sins, and betrayals of his church’s bishops and priests. The Catholic priesthood and the Catholic Church are at a tipping point. This gripping memoir of faith, bringing us to our knees, might well move us over the edge.”—Rev. Donald Cozzens, former rector of the Roman Catholic seminary in Cleveland and author of Notes from the Underground

“James Carroll has chronicled the career of his faith in many gripping books. The Truth at the Heart of the Lie is the culmination. His struggle as a Catholic is specific and authoritative. But his open heart, saddened soul, and reforming mind will arouse all searchers born into the religions of mere humans.”—Bernard Avishai, author of The Tragedy of Zionism

“Though a wrenching and honest confrontation with the dismaying recent history of the Church, the book can and should be read also as a cautious, wise, and real word of hope. . . . A disturbing, moving, and important book from one of the keenest interpreters of contemporary Catholicism.”—Kevin Madigan, Winn Professor of Ecclesiastical History, Harvard University