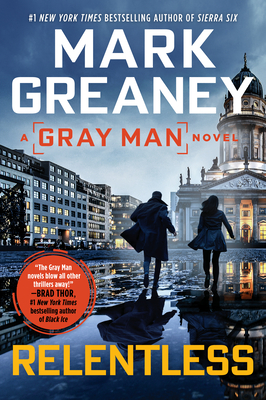 This is book number 10 in the Gray Man series.

The Gray Man's search for missing intelligence agents plunges him deep into a maelstrom of trouble in the latest entry in the #1 New York Times bestselling series.

The first agent disappearance was a puzzle.

The second was a mystery.

The third was a conspiracy.

Intelligence operatives around the world are disappearing. When a missing American agent re-appears in Venezuela, Court Gentry, the Gray Man, is dispatched to bring him in, but a team of assassins has other ideas. Court escapes with his life and a vital piece of intelligence.

Meanwhile, CIA agent Zoya Zakharova is in Berlin. Her mission: to infiltrate a private intelligence firm with some alarming connections. The closer she gets to answers, the less likely she is to get out alive.

Court and Zoya are just two pieces on this international chessboard, and they're about to discover one undeniable truth—sometimes capturing a king requires sacrificing some pawns.

Mark Greaney has a degree in international relations and political science. In his research for the Gray Man novels, including One Minute Out, Mission Critical, Agent in Place, Gunmetal Gray, Back Blast, Dead Eye, Ballistic, On Target, and The Gray Man, he traveled to more than fifteen countries and trained alongside military and law enforcement in the use of firearms, battlefield medicine, and close-range combative tactics. With Marine LtCol Rip Rawlings, he wrote the New York Times bestseller Red Metal. He is also the author of the New York Times bestsellers Tom Clancy Support and Defend, Tom Clancy Full Force and Effect, Tom Clancy Commander in Chief, and Tom Clancy True Faith and Allegiance. With Tom Clancy, he coauthored Locked On, Threat Vector, and Command Authority.

"Mark Greaney knows how to bring it, and he brings it big time in Relentless...[it] resembles a Hollywood action mash-up in all the right ways...Greaney blends the brawn of Brad Thor with the brains of Daniel Silva, crafting a thriller extraordinaire that readers will devour, not just read."—The Providence Journal

“Vivid action scenes…this is still a must for espionage thriller fans.”—Publishers Weekly

“Never has an assassin been rendered so real yet so deadly. Strikes with the impact of a bullet to the chest…not to be missed.”—James Rollins, New York Times bestselling author

“Writing as smooth as stainless steel and a hero as mean as razor wire…The Gray Man glitters like a blade in an alley.”—David Stone, New York Times bestselling author

“The latest in the Gray Man series continues to demonstrate why Greaney belongs in the upper echelon of special-ops thriller authors.”—Booklist (starred review)

“The action is almost nonstop, with nice twists right to the end…This is good, Clancy-esque entertainment.”—Kirkus Reviews

“Mark Greaney is truly a master of his genre."—Manhattan Book Review