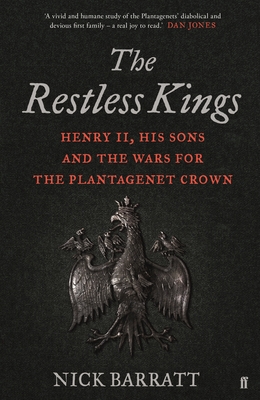 "A vivid and humane study of the Plantagenets' diabolical and devious first family - a real joy to read."--Dan Jones, author of The War of the Roses In The Restless Kings Nick Barratt presents the tumultuous struggle for supremacy between the first Plantagenet king, Henry II, and his four sons - a drama that tore apart the most powerful family in western Europe and shaped the future of two nations. Through force of arms, Henry II won an empire which was then lost by his son John. Although the key events took place over 800 years ago, their significance still resonates today. The root causes of Brexit can be found in King John's retreat from Europe, isolating himself in England, and the seeds of the current tensions in the Middle East were sown by Richard the Lionheart's Crusade against the infidels in the Holy Land. We also learn about some of the most powerful women of the medieval period, formidable and canny politicians in their own right who outlived their spouses and children. The Restless Kings will challenge everything you assumed you knew about the medieval world. Above all, it brings to life some of the most remarkable, complex, flawed and brilliant monarchs ever to have sat on the English throne.

Professor Nick Barratt is an author, broadcaster, and historian. He is an honorary associate professor of public history at the University of Nottingham, and Associate Director, Collections and Engagement, at the University of London's Senate House Library as well as a teaching fellow at the University of Dundee. His most recent publication, The Forgotten Spy, tells the story of his great uncle - Stalin's first mole in Whitehall. He has previously written on subjects as diverse as the story of Greater London and the Titanic.