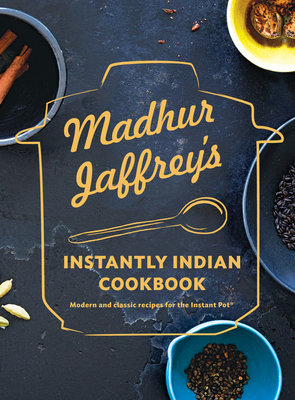 “The only Instant Pot cookbook the world still needs ... Full of those timeless Indian recipes Jaffrey is known for ... The flavor to ease factor ratio in these recipes is undoubtedly high, and, as always, Jaffrey’s calm, nurturing voice guides you through each step.” —Priya Krishna, Bon Appetit

Master Indian cooking at home with more than seventy recipes from the multi-James Beard Award–winning author who is revered as the “queen of Indian cooking” (Saveur).

Here she shares inviting, easy-to-follow recipes—some entirely new, others reworked classics—for preparing fantastic Indian food at home. While these dishes are quick and easy to prepare, they retain all the rich complexity for which Jaffrey’s food has always been known, making this the only Indian cookbook with recipes designed for the Instant Pot you’ll ever need.

RECIPES: From classics like butter chicken and buttery dal to new sure-to-be-favorites like kale cooked in a Kashmiri style and Goan-style clams, these recipes capture the flavorful diversity of Indian cuisine.

EASY-TO-FOLLOW: Written with the clarity and precision for which Jaffrey has always been known, these are flavor-forward recipes that make the most of the Instant Pot’s unique functionality.

A DIFFERENT KIND OF COOKBOOK: Rather than simply adapting recipes for one-pot cooking, Jaffrey has selected the essential dishes best suited for preparing using the Instant Pot, and created some all-new delectable dishes that make the most of its strengths.

BEYOND THE INSTANT POT: Also included are thirteen bonus, no-special-pot needed recipes for the chutneys, salads, and relishes you need to complete any Indian meal. Think avocado-radish salad, fresh tomato chutney, and yogurt and apple raita.

SPICES AND SPECIAL INGREDIENTS: Jaffrey provides a list of pantry essentials, from asafetida to whole spices, as well as recipes for her own garam masala blend and more.

TIPS: Here too is Jaffrey’s advice on the best way to make rice, cook meat and fish in your Instant Pot, and more, based on her own extensive testing.

MADHUR JAFFREY is the author of many previous cookbooks--seven of which have won James Beard Awards--and was named to the Who's Who of Food and Beverage in America by the James Beard Foundation. She is the recipient of an honorary CBE and is also an award-winning actress, having won the Silver Bear for Best Actress at the Berlin Film Festival, with numerous major motion pictures to her credit.

“The only Instant Pot cookbook the world still needs is one by Madhur Jaffrey. Long considered one of the utmost authorities on Indian cuisine in the U.S., Jaffrey’s first book, An Invitation to Indian Cooking showed Americans a world beyond ‘curry,’ where Indian food did not need to be dumbed down to appeal to western palates. This book is similarly uncompromising in its recipes, marrying the convenience of the Instant Pot with Jaffrey’s wealth of expertise.” —Priya Krishna, Bon Appetit

“One of the foremost authorities on Indian cooking.” —Saveur

“For the best Indian food, we've always turned to Madhur Jaffrey. In her latest cookbook, she’s created new recipes and reworked old ones, all for the Instant Pot. The dishes are quick and easy to make thanks to the multi-cooker, and they retain the richness and complexity Jaffrey’s cooking is known for.” —Epicurious

"[Jaffrey] is widely considered responsible for bringing Indian cooking to a western audience. . . . [Her] latest book is a testament to the research and meticulousness that characterise her work: even basic rice recipes are prefaced by very specific instructions for how to remove the rice from the Instant Pot without ruining the delicate grains." —The Guardian

“A trailblazer." —Meera Sodha, author of Made in India

“[A] winning collection of recipes that are big on flavor. . . . Options include soups, dals, curries, sides, and condiments, with plenty of dishes for vegetarians and omnivores alike. Classics (butter chicken, several chickpea recipes, Goan shrimp curry) mingle with some unexpected dishes (spicy fat French fries, quinoa with tomatoes), any of which would make for a proper feast.” —Publishers Weekly

“What could be more welcome than a cookbook combining the it-gadget’s novelty with the venerable traditions of Indian cooking? Award-winning actress and apostle of the subcontinent’s cuisine, Jaffrey has already established herself as grande dame of Indian cooking for the English-speaking world. As she points out, many Indian kitchens already use multiple pressure cookers, so the Instant Pot scarcely changes everyday approaches for the Indian home cook.” —Booklist

“[Jaffrey’s] dishes are unfailingly complex in flavour, her recipes well explained and simple to make. . . . The recipes themselves are easy to follow, with little jargon, and are structured in helpful numbered steps (rarely more than two or three). . . . A useful glossary exists at the end of the book, with brief explainers on everything from chickpea flour to Jaffrey’s own garam masala spices blend. . . . There’s a wonderful range [of recipes] spanning the Indian subcontinent, and rarely do they take more than 30 minutes. I’m sold.” —Tomé Morrissy-Swan, The Daily Telegraph

“Leave it to Madhur Jaffrey to find new ways to master the cooking appliance you thought could do no better. Whether you’re an occasional Instant Pot user or an avid one, the actress and cookbook author’s new book . . . ups the ante.” —Alison Spiegel, Christopher Kimball’s Milk Street