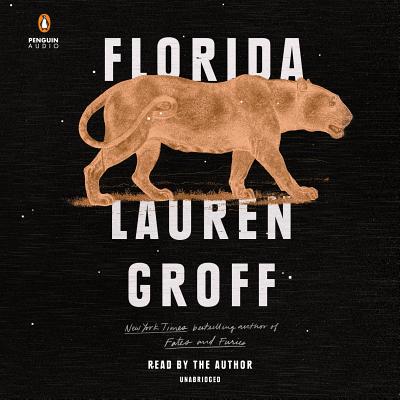 By Lauren Groff, Lauren Groff (Read by)
for information about purchasing this book, please contact orders@bookpassage.com

“Groff has surpassed herself with this stunning collection of short stories. Florida, with its ‘hellmouth’ summers, ‘all humidity and pink stucco and cellulite rippling under the hems of shorts,’ is the loose thread that ties the stories together. Told with deep intelligence and a compassion for characters viewed coolly from a distance, Groff’s collection examines the themes of family, loss, and human connection in startling and often heartbreaking ways.”
— Grace Harper, Mac's Backs, Cleveland Heights, OH

The bold new book from the celebrated New York Times-bestselling author of Fates and Furies.

In her vigorous and moving new book, Lauren Groff brings her electric storytelling and intelligence to a world in which storms, snakes, and sinkholes lurk at the edge of everyday life, but the greater threats and mysteries are of a human, emotional, and psychological nature. Among those navigating it all are a resourceful pair of abandoned sisters; a lonely boy, grown up; a restless, childless couple, a searching, homeless woman; and an unforgettable, recurring character - a steely and conflicted wife and mother.

The stories in this collection span characters, towns, decades, even centuries, but Florida--its landscape, climate, history, and state of mind--becomes its gravitational center: an energy, a mood, as much as a place of residence. Groff transports the reader, then jolts us alert with a crackle of wit, a wave of sadness, a flash of cruelty, as she writes about loneliness, rage, family, and the passage of time. With shocking accuracy and effect, she pinpoints the moments and decisions and connections behind human pleasure and pain, hope and despair, love and fury--the moments that make us alive. Startling, precise, and affecting, Florida is a magnificent achievement.

Lauren Groff is the New York Times bestselling author of three novels, The Monsters of Templeton, Arcadia, and Fates and Furies, and the celebrated short story collection Delicate Edible Birds. Her work has been featured in the New Yorker, Harper's, the Atlantic, and several Best American Short Stories anthologies. She has won the Paul Bowles Prize for Fiction, the PEN/O. Henry Award, and the Pushcart Prize; and has been a finalist for the National Book Award, the National Book Critics Circle Award, the Orange Award for New Writers, and the Los Angeles Times Book Prize.

"Lauren Groff is a great storyteller . . . Florida is restorative fiction for these urgent times. Its final gestures, even the most ominous . . . lean toward love and the promise of good people, in not just this state but the world." – New York Times

"Something untameable lurks restlessly beneath the surface of this book. Groff’s incomparable prose pulsates with peril; its beauty, like that of the titular state itself, lies in a certain wild lushness." – Financial Times

"These new stories are tight and contained, and they pulse with menace and feral energy." – Wall Street Journal

"Florida is a gift to writers. . . . There is more than a little of David Lynch in Ms Groff’s Floridian landscape: exotic and bright, yet pulsing with hidden malevolence . . . Ms Groff’s writing is marvelous, her insights keen, each story a glittering, encrusted treasure hauled from the deep." – The Economist

"As fine and beautifully crafted as any fiction she has written . . . . . [Groff] is one of the best writers in the United States, and her prize-winning stories reverberate long after they are read. In past years, the rare short story collection . . . has won the Pulitzer Prize for Fiction. Florida should be in the running next year." – LA Review of Books

"Groff throws open the windows and turns off the A/C, mosquitoes and heatstroke be damned . . . Groff’s Florida may do the same thing for its readers: surprise and menace us, fascinate and sometimes frighten us, and leave the whole world fuller than it was before." – Slate

"The gems here are like the Florida Keys: distinct islands, each beautiful in its own way. Meet a lonely runner, two lost sisters and a son growing up without his mother. Prepare to sweat, see snakes and get lost in a swamp. Groff’s depictions aren’t always pretty, but they’ll keep you turning the pages—and not just for the breeze." – People Magazine

"[A] transcendent writer. . . [Florida] isn’t a short-story collection so much as an ecosystem." –The Atlantic

"[Groff] stakes her claim to being Florida's unofficial poet laureate, as Joan Didion was for California."—Washington Post

"Superlative collection — seriously, there’s not a dud in the bunch ... Groff is an extra terrific writer, as ever...Having followed an astonishing, astonishingly accessible novel with such an outstanding, accessible collection, Groff is surely poised to topple the tiny monkeys in charge of deciding that the perceived realm of the feminine isn’t sufficiently deep." – Boston Globe

"Taken together, the stories have the feel of autobiography, although, as in a Salvador Dali painting, their emotional disclosures are encrypted in phantasmagoria . . . The sentences indigenous to Florida are gorgeously weird and limber . . ." – The New Yorker

"The landscapes in the short stories are silty, rich, sun-bleached, cold as stone. They are strong characters of their own that will not be ignored." – Electric Literature

"Impossible to put down." – Vox

"Groff’s mythic almost gothic stories about Florida and domesticity and entrapment took me right back to the Bronte sisters . . . Masterfully made." – LitHub

"Groff is still on-brand. Her writing about relationships rarely sticks within the narrow, Updike-ian confines of domestic dysfunction, though. Even in short stories, she prefers broader canvases, and much of Florida is filled with hurricanes and other violent storms that run parallel to the personal crises she describes . . . Straightforward but moody and metaphorical — magical realism without the sparkle and sense of wonder." – Los Angeles Times

"Groff’s Florida is touched by sublimity. It is an ‘Eden of beautiful things,’ glorious and decayed, attacked and altering." – The Rumpus

"[The stories] overflow with imagery so powerfully tangible that it’s hard to believe the humidity and rainstorms aren’t truly escaping from the page to touch you . . ." – Chicago Review of Books

"Brooding, inventive and often moving short stories . . .  In Groff's trademark zigzagging storytelling style, revelations ricochet between pages — and sometimes even within single sentences . . . Groff, through her own acrobatic style, attests to the benefits of a firm grounding in grammar and vocabulary. Lots of things go south fast in the stories collected in Florida — like marriages, careers and the weather — but throughout, Groff's gifts as a writer just keep soaring higher and higher." – NPR Fresh Air

"Groff’s desire seems to be to show — in a frequently funny, sometimes painful and always deeply sensitive way — that women and children are often stronger than we tend to think, and that the Earth is more fragile than we usually allow ourselves to understand." – San Francisco Chronicle

"[The stories] take on an inexplicably cohesive form with a sad-, beautiful- and naked-ness that reverberates in the mind long after the book is shut." – The Atlanta Journal-Constitution

"She hasn't lost a step since Fates And Furies . . . Groff's language is, as always, gorgeous and precise. Her ability to map the inner contours of characters who seem to exist entirely in extremis — and, almost entirely, within a fragile shell of feigned competence and normalcy — is remarkable. Her Florida is a frightening place that bends (solely through the eyes and experiences of her characters) into a discomfortingly modern Southern Gothic tradition. Her stories — all of them — are haunted." – NPR Books

"Slime mold, a father killed by snake venom, a mother haunted by a deadly panther, and half-feral little girls abandoned on an island—these bizarre happenings could be set only in the Sunshine State, and be written only by Groff, the Gabriel García Márquez of Gainesville. Reading as required as insect repellent in a swamp." – O Magazine

"Groff has grasped the true grotesqueness of Florida, an ‘Eden of dangerous things’ spliced with stinking bodies, living and dead. In her hands, Florida as state and state-of-mind becomes an alembic, cohering these discrete stories as perfectly as if they were written in one sitting . . . Florida is so much, perhaps too much. Florida is just enough . . . Groff’s powers transform that glut of vitality into something startlingly precarious and, even to a forsworn Floridian like me, something startling and precious." – The Millions

"[Florida] evinces a deep comprehension and appreciation of the wildness that reaches from the state’s swamps and forests to inform even the most developed pockets of civilization. Life cannot be tamed here, Groff suggests, and the characters . . . feel the state’s inexorable, unsettling pull. The book is no less difficult to resist." – South Florida

"Subversive, but quietly; it captures what’s mysterious about the inevitable, what’s bizarre about the inescapable . . . these narratives of young families, divorced couples, and unconventional women vibrate with something new . . . The rains in Florida are biblical to say the least. The margins between earthen and celestial routinely dissolve . . . Florida suggest that the relationship between humans and our planet—that home none of us chose—transcends the power struggle of dominance and submission." – The Paris Review

"Masterful . . . Groff’s writing is stripped down and honed, with few extraneous words. She experiments with form without veering into gimmick or forsaking the power of language, which she expertly wields." – am New York

"A weird, spooky love letter to Florida, by one of Obama’s favorite writers . . . Groff’s detailed descriptions are transportive; you feel like you’re there in the dank cabin or in the eye of the hurricane . . . And don't get us started on the snakes. Florida, man." – PureWow

"This collection of 11 stories . . . speak to each other not in the light of the Sunshine State, but in the shadows. Groff’s world is a dark, strange one of tempests and terrors. Her characters . . . fall into loneliness and self-ruin at each turn." – Town & Country Magazine

"As much plot and detail packed into. . .15 pages as you'll find in many novels. . . The whole world is Florida, paradise because it’s dangerous and dangerous because it’s paradise." – Tampa Bay

"Filled with the mesmerizing, decadent language . . . the titular state looms as a setting of lush beauty and swift menace . . . Groff's storytelling has such ferocious energy."– Star Tribune

"We would probably give a five-star review to Lauren Groff’s grocery list. Her language is beautiful, surprising, and always unfolding. Florida is a visceral story collection . . . told through a series of rich, layered characters . . . It’s as if you’re eavesdropping the whole time, peering in on lives vastly different from and yet so familiar to your own."– GOOP

"If Barack Obama found time as president to read Fates and Furies, Groff’s third novel, you can clear a weekend this summer to read her follow-up. Florida is a blistering series of short stories set in a state where calm and intensity work hand in hand." – Conde Nast Traveler

"Groff sidesteps Miami glitter for the sticky, snake-thick subtropics, the swamps and summer heat giving birth to an electrifying array of characters and worlds." –Vanity Fair

"Readers can practically feel the mosquitoes buzzing at their necks in stories Ms. Groff started writing a decade ago after moving to Florida . . . In her stories, predators bite, hurricanes destroy and nature does not forgive." –Wall Street Journal

"A dangerous energy, buoyed by rich and unsettling details, run through the Fates and Furies author’s new collection as her characters face down snakes, hurricanes and their own self-destructive behavior." –Time Magazine

"Think of the stories in Lauren Groff's collection Florida as gems. You'll want to revisit them over and over, and see how you'll react to them under different circumstances, different slants of light. But on a more basic level: Each story is exquisite." –Refinery29

"Groff moves adroitly through an impressive range of lives, times, and places...The book stages an intriguing relationship between the individual and the collective." –Harper's Magazine

"Groff fans will recognize the descriptive zest instantly. . . raw, danger-riddled, linguistically potent pieces. They unsettle their readers at every pass . . . A literary tour de force of precariousness set in a blistering place, a state shaped like a gun." –Kirkus, starred review