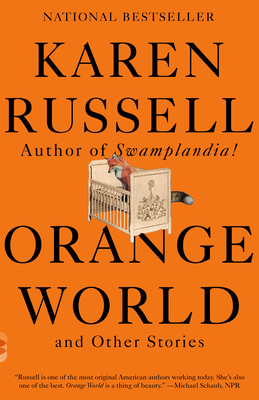 In "Bog Girl," a young man falls in love with a two-thousand-year-old girl that he's extracted from a mass of peat in a Northern European bog. In "The Prospectors," two opportunistic young women fleeing the Great Depression strike out for new territory, and find themselves fighting for their lives. And in the brilliant, hilarious title story, a new mother desperate to ensure her infant's safety strikes a diabolical deal, agreeing to breastfeed the devil in exchange for his protection.

The landscape in which these stories unfold is a feral, slippery, purgatorial space, bracketed by the void--yet within it Russell captures the exquisite beauty and tenderness of ordinary life. Orange World is a miracle of storytelling from a true modern master.

KAREN RUSSELL has received a MacArthur Fellowship and a Guggenheim Fellowship, the "5 under 35" prize from the National Book Foundation, the New York Public Library Young Lions Award, and the Berlin Prize from the American Academy. She lives in Portland, Oregon with her husband, son, and daughter.

“Russell is one of the most original American authors working today. She's also one of the best. Orange World is a thing of beauty, a stunning collection from one of the most brilliant literary minds of her generation.”
—Michael Schaub, NPR

“Orange World makes me want to shout with joy. Russell’s ease with her material, her sheer glee on the page, shines through in each piece. . . . Delicious.”
—Bethanne Patrick, The Washington Post

“Russell’s language rockets off the page. . . . One of our most entrancing storytellers.”
—Vogue

“Is there a colorist in American fiction with the same vivid talents as Karen Russell? . . . Her descriptions are 21st century Dickensian genius.”
—The Boston Globe

“Russell creates fully realized worlds. Her writing is particular and alive. Her imagination spills over the sink and hits the backsplash.”
—The New York Times

“Russell’s particular gift lies in taking themes that are close to universal and presenting them in stories whose strangeness comes to seem entirely natural, even necessary.”
—The New York Times Book Review

“Astonishing. . . . Russell seems the most natural storyteller alive, so completely does she give herself to premises that might undo a lesser writer.”
—New York Review of Books

“A stunning collection. . . . It'll get under your skin in the best possible way.”
—Good Housekeeping

“[A] brilliantly inventive . . . wonderful new collection of short stories. . . . Russell grounds each story in human experience, both poignant and hilarious in turn. . . . Underlying all of this is the exquisite beauty of Russell’s sentences, which will repeatedly surprise readers with their imagery and masterful language.”
—BookPage (starred review)

“Virtuoso Russell, gifted with acute insights, compassion, and a daring, free-diving imagination, explores the bewitching and bewildering dynamic between ‘the voracious appetite of nature and its yawning indifference’ and humankind’s relentless profligacy and obliviousness.”
—Booklist (starred review)

“Orange World is [Russell’s] best collection yet. Her imagination’s baroque syntax has been planed down to the absolute essentials, allowing the power of her vision to speak for itself. . . . This is prophetic work written with clarifying fury.”
—Lit Hub