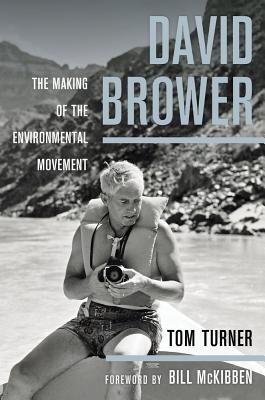 In this first comprehensive authorized biography of David Brower, a dynamic leader in the environmental movement over the last half of the twentieth century, Tom Turner explores Brower's impact on the movement from its beginnings until his death in 2000.

Frequently compared to John Muir, David Brower was the first executive director of the Sierra Club, founded Friends of the Earth, and helped secure passage of the Wilderness Act, among other key achievements. Tapping his passion for wilderness and for the mountains he scaled in his youth, he was a central figure in the creation of the Point Reyes National Seashore and of the North Cascades and Redwood national parks. In addition, Brower worked tirelessly in successful efforts to keep dams from being built in Dinosaur National Monument and the Grand Canyon.

Tom Turner began working with David Brower in 1968 and remained close to him until Brower’s death. As an insider, Turner creates an intimate portrait of Brower the man and the decisive role he played in the development of the environmental movement. Culling material from Brower’s diaries, notebooks, articles, books, and published interviews, and conducting his own interviews with many of Brower’s admirers, opponents, and colleagues, Turner brings to life one of the movement's most controversial and complex figures.

Tom Turner has worked at the Sierra Club, Friends of the Earth, the Sierra Club Legal Defense Fund, and Earthjustice. He is the author of Wild by Law; Sierra Club: 100 Years of Protecting Nature; Justice on Earth; Roadless Rules; and hundreds of articles and op-eds on the environment.

"An exceptionally good biography. . . . a bold and satisfying portrayal of a complex man. If you thought John Muir was the only wildlife grandaddy in the Bay Area, Turner's book will set you straight, enjoyably. . . . Admirably, Turner gathers the octopus of Brower's interests into a cohesive bundle that offers readers an overview of the environmental movement and insight into one of its most intriguing, controversial characters."
— Lou Fancher

"David Brower has slipped into semi-obscurity over the years, but he deserves a place in the pantheon of environmental heroes. . . . Turner brings Brower to life as a charismatic, intensely passionate man who could be as frustrating to his allies as to his adversaries. . . . Anyone who has had the honor of seeing the breathtaking stillness of the Grand Canyon can be thankful for Brower’s unreasonable evangelism."
— REBECCA TUHUS-DUBROW

"I cannot say enough positive about this book. True, Turner makes Brower the hero, but how could it be otherwise? His hero is not without faults, serious faults, but it is by looking at how the environmental movement overcame them that we learn how to keep the movement going."
— David Brooks