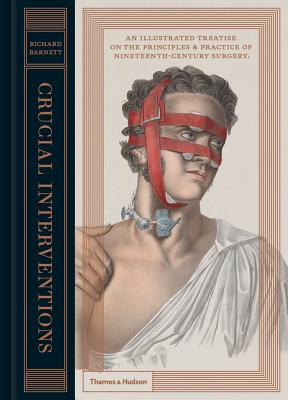 A beautifully illustrated look at the evolution of surgery, as revealed through rare technical illustrations, sketches, and oil paintings

The nineteenth century saw major advances in the practice of surgery. In 1750, the anatomist John Hunter described it as “a humiliating spectacle of the futility of science”; yet, over the next 150 years the feared, practical men of medicine benefited from a revolution in scientific progress and the increased availability of instructional textbooks. Anesthesia and antisepsis were introduced. Newly established medical schools improved surgeons’ understanding of the human body. For the first time, surgical techniques were refined, illustrated in color, and disseminated on the printed page.

Crucial Interventions follows this evolution, drawing from magnificent examples of rare surgical textbooks from the mid-nineteenth century. Graphic and sometimes unnerving yet beautifully rendered, these fascinating illustrations, acquired from the Wellcome Collection’s extensive archives, include step-by-step surgical techniques paired with depictions of medical instruments and depictions of operations in progress.

Arranged for the layman (from head to toe) Crucial Interventions is a captivating look at the early history of one of the world’s most mysterious and macabre professions.

Richard Barnett is currently the director of studies in history, Pembroke-King’s Program, University of Cambridge, and honorary research fellow, UCL. His writing has appeared in The Lancet, The London Magazine, and The Natural Death Handbook. He is the author of Crucial Interventions, Medical London: City of Diseases, City of Cures and The Sick Rose.

The most striking feature of this impressive book is the very large number of images reproduced from the historical collections of the Wellcome Library. Every page is filled with vivid illustrations of surgical instruments and every conceivable surgical procedure, including many that readers may find difficult to imagine. Barnett provides an informative and engaging account of the emergence of the surgery that is recognized today. Highly recommended.
— Choice