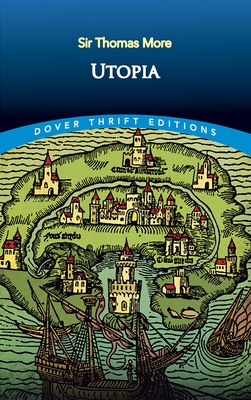 By Thomas More
$4.00
Email or call for price

First published in Latin in 1516, Utopia was the work of Sir Thomas More (1477-1535), the brilliant humanist, scholar, and churchman executed by Henry VIII for his refusal to accept the king as the supreme head of the Church of England.
In this work, which gave its name to the whole genre of books and movements hypothesizing an ideal society, More envisioned a patriarchal island kingdom that practiced religious tolerance, in which everybody worked, no one has more than his fellows, all goods were community-owned, and violence, bloodshed, and vice nonexistent. Based to some extent on the writings of Plato and other earlier authors, Utopia nevertheless contained much that was original with More.
In the nearly 500 years since the book's publication, there have been many attempts at establishing Utopias both in theory and in practice. All of them, however, seem to embody ideas already present in More's classic treatise: optimistic faith in human nature, emphasis on the environment and proper education, nostalgia for a lost innocence, and other positive elements.
In this new, inexpensive edition, readers can study for themselves the essentials of More's utopian vision and how, although the ideal society he envisioned is still unrealized, at least some of his proposals have come to pass in today's world.