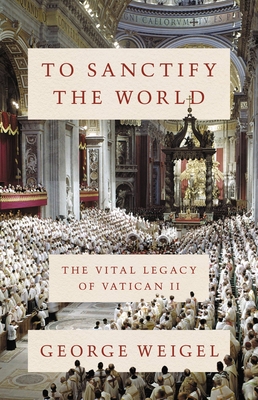 The Second Vatican Council (1962–1965) was the most important Catholic event in the past five hundred years. Yet sixty years after its opening on October 11, 1962, its meaning remains sharply contested and its promise unfulfilled.

In To Sanctify the World, George Weigel explains the necessity of Vatican II and explores the continuing relevance of its teaching in a world seeking a deeper experience of freedom than personal willfulness. The Council’s texts are also a critical resource for the Catholic Church as it lives out its original, Christ-centered evangelical purpose.

Written with insight and verve, To Sanctify the World recovers the true meaning of Vatican II as the template for a Catholicism that can propose a path toward genuine human dignity and social solidarity.

George Weigel is a distinguished senior fellow of Washington’s Ethics and Public Policy Center. The first volume of his biography of Pope John Paul II, Witness to Hope, was a New York Times bestseller, and his writing appears in a variety of publications, including the Wall Street Journal. He lives in North Bethesda, Maryland.

“Weigel is perfectly suited to the task of re-presenting the history and theology of Vatican II to naysayers on both ends of the spectrum. And he does just that in this accessible, thorough, and honest account of the Council… George Weigel has done the Church a great service in defending the Council, taking its problems seriously, and explaining the way forward.”—Washington Free Beacon

“With characteristic fluency, [Weigel] defends not only Vatican II but the entire centuries-old process by which bishops, meeting in council and praying for divine guidance, have wrestled with subtle doctrinal points and expressed them in complex texts that took decades to digest fully... The argument is artful.”—The Economist

“This work by George Weigel is a very important read not only because of the recently celebrated 60th anniversary of the beginning of the Second Vatican Council but because Vatican II continues to be misunderstood by many and manipulated by some as a justification for ideas the Council Fathers would never have countenanced. Weigel helps one to understand the meaning and importance of the Council like no other.”—National Catholic Register

“Superb… an accurate understanding of the council has value to persons well beyond the borders of the church. And that’s why To Sanctify the World is so important.”—National Review

“Weigel delivers a probing study of the figures and theologies that influenced Catholic policy… there is much valuable work in this fluid reevaluation of Vatican II’s origins and impact.”—Publishers Weekly

“George Weigel is perhaps the most well-known and influential Vatican-watcher and public theologian in America.”—Claremont Review of Books

“In this book, Weigel gives a masterful interpretation of the Second Vatican Council that could not come at a better time for seminarians, theologians, pastors, and all who seek to understand its documents. He provides important keys for understanding the legacy of Vatican II, helping us through the contemporary debates about the Council. Weigel’s engaging book is a watershed in studies of Vatican II.”—Eduardo J. Echeverria, Sacred Heart Major Seminary

“In explaining why Vatican II was necessary and what it taught, George Weigel has given us a rich history of the Catholic Church’s efforts to meet the challenges of modernity. Viewed in their intellectual, social, and political context, the personalities, debates, and documents of that momentous event emerge with new clarity in this remarkable work. Meticulously documented, yet eminently readable, To Sanctify the World is a matchless guide to the meaning and import of the Second Vatican Council.”—Mary Ann Glendon, author of A World Made New

“Historians tell us that the genuine interpretation of an Ecumenical Council’s teaching usually at least takes sixty years to settle. That means we are now at the point of serenely and sanely understanding the authentic magisterium of Vatican Council II. And count on Weigel to provide an attractive and compelling synthesis of it.”—Timothy Cardinal Dolan, Archbishop of New York

“Anyone interested in a bold, yet authentic interpretation of Vatican II should read this book, in which George Weigel persuasively demonstrates that the Council—the Holy Spirit’s greatest gift to Catholicism in the twentieth century—was not so much about reinventing and ‘modernizing’ the Church as Christifying and converting the world.”—Robert Barron, bishop of Winona-Rochester and founder, Word on Fire Catholic Ministries

“All of Weigel’s best qualities are displayed here—penetrating intelligence, erudition, clarity, breadth of vision, remarkable range of insider’s knowledge. I doubt that Vatican II—still bitterly contested in some quarters sixty years after the event—will ever be more interestingly or more accurately understood than in this deeply moving book.”—Lance Morrow, author of God and Mammon

“In a time of widespread Christological amnesia and even denial, Weigel’s new book offers a bracing remedy. He provides a magisterial recovery of the Christological vision and commitment that permeate the documents of the Second Vatican Council and that illuminate the Church’s way forward. It is the way toward the sanctification of the world through living and sharing faith in Jesus Christ, who is the true joy of the Gospel.”—Robert Imbelli, author of Rekindling the Christic Imagination

“This is a must-read book for anyone interested in understanding the event of Vatican II. Rich in historical and theological context, it offers a clear and readable argument for understanding Vatican II as in continuity with the whole Catholic tradition and as a call to re-center the Church and its mission on the person of Jesus Christ. I can think of no more important message for this historical moment.”—Patrick Kelly, Supreme Knight of the Knights of Columbus