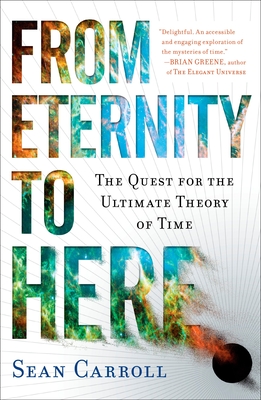 "An accessible and engaging exploration of the mysteries of time."
-Brian Greene, author of The Elegant Universe

Twenty years ago, Stephen Hawking tried to explain time by understanding the Big Bang. Now, Sean Carroll says we need to be more ambitious. One of the leading theoretical physicists of his generation, Carroll delivers a dazzling and paradigm-shifting theory of time's arrow that embraces subjects from entropy to quantum mechanics to time travel to information theory and the meaning of life.

From Eternity to Here is no less than the next step toward understanding how we came to exist, and a fantastically approachable read that will appeal to a broad audience of armchair physicists, and anyone who ponders the nature of our world.

SEAN CARROLL is a theoretical physicist at the California Institute of Technology. He received his PhD in 1993 from Harvard University. Recently, Carroll has worked on the foundations of quantum mechanics, the arrow of time, and the emergence of complexity. He has been awarded prizes and fellowships by the National Science Foundation, NASA, the Sloan Foundation, the Packard Foundation, the American Physical Society, the American Institute of Physics, and the Royal Society of London. His most recent award, in 2014, was from the Freedom from Religion Foundation. Carroll has appeared on The Colbert Report (twice), PBS’sNOVA, and Through the Wormhole with Morgan Freeman, and he frequently serves as a science consultant for film and television. He has been interviewed by various NPR shows, Scientific American, Wired, and The New York Times. He has given a TED talk on the multiverse that has more than one million views, and he has participated in a number of well-attended public debates concerning material in his new book, including one in New York City in 2014 with Eben Alexander.

"Unifying cosmology, thermodynamics, and information science into a refreshingly accessible whole, From Eternity to Here will make you wish time's arrow could fly in reverse, if only so you could once again read the book for the first time."
-Seed Magazine

"Carroll...takes his readers on a fascinating and refreshing trek through every known back alley and cul de sac of quantum mechanics, relativity, cosmology and theoretical physics. The best way to grasp the rich mysteries of our universe is by constantly rereading the best and clearest explanations. Mr. Carroll's From Eternity to Here is certainly one of them."
-Wall Street Journal

"For anyone who ever wondered about the nature of time and how it influences our universe, this book is a must read. It is beautifully written, lucid, and deep."
-Kip Thorne, Feynman Professor of Theoretical Physics at Caltech, author of Black Holes and Time Warps

"Sean Carroll's From Eternity to Here provides a wonderfully accessible account of some of the most profound mysteries of modern physics. While you may not agree with all his conclusions, you will find the discussion fascinating, and taken to much deeper levels than is normal in a work of popular science."
-Sir Roger Penrose, University of Oxford, author of The Road to Reality and The EMperor's New Mind