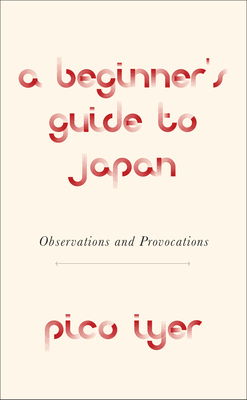 By Pico Iyer
for information about purchasing this book, please contact orders@bookpassage.com

This is not a guidebook, yet I plan to give it to everyone who is even thinking of going to Japan. Pico Iyer reflects on the country where he has lived for over 30 years.  Going far beyond the surface, he writes of Japan’s maddening contradictions. Westerners think of the Japanese as obedient to social norms, yet he shows us how the Japanese passion for baseball can get what we would consider “out of control.” Whether he is writing about vending machines, travel, clothes, or animism, every section is revealing. He doesn’t gloss over the fact that devotion to tradition and service has a flip side of exclusivity and insularity. Iyer is profound, yet fun to read. I laughed and then was fascinated by a company called Family Romance which hires actors “to be family members for clients who are going through hard times.”  —Elaine

“Arguably the greatest living travel writer” (Outside magazine), Pico Iyer has called Japan home for more than three decades. But, as he is the first to admit, the country remains an enigma even to its long-term residents. In A Beginner’s Guide to Japan, Iyer draws on his years of experience—his travels, conversations, readings, and reflections—to craft a playful and profound book of surprising, brief, incisive glimpses into Japanese culture. He recounts his adventures and observations as he travels from a meditation hall to a love hotel, from West Point to Kyoto Station, and from dinner with Meryl Streep to an ill-fated call to the Apple service center in a series of provocations guaranteed to
pique the interest and curiosity of those who don’t know Japan—and to remind those who do of its myriad fascinations.

Pico Iyer is the author of fifteen books, translated into twenty-three languages, and has been a constant contributor for more than thirty years to Time, The New York Times, Harper’s Magazine, the Los Angeles Times, and more than 250 other periodicals worldwide. His four recent talks for TED have received more than ten million views. www.picoiyerjourneys.com

“When one of the best-loved travel writers of our time comes out with a  book that is part cheat sheet and part tribute to his home of over 30 years, it’s not an understatement to say that it is a must-read”—Elle

“With an elegant, understated manner, Iyer offers poignant reflections on his adopted country and its maddening contradictions and shifting parts . . . Subtle observations [that] reveal a great deal . . . Marvelously nuanced"—Kirkus Reviews

“Stitching together observations, statistics, and personal encounters with meditative precision, Iyer depicts a paradoxical culture that finds communion in silence, passion in solitude, and animation in lifeless objects . . . Candid and wholly absorbing, Iyer’s inventive guidebook is more than a collection of cultural curiosities—it’s a tribute to a nation that prizes social consciousness and sees life in temporality."—Booklist [starred]

“Iyer challenges the Western view of the Japanese as impersonal and robotic . . . Striking observations . . . Iyer's Japan is a captivating, and sometimes maddening portrait of a nation unlike any other . . . This meditative and occasionally cheeky guide to Japan from Pico Iyer will delight Japanophiles and armchair travelers alike.”—Shelf Awareness

“Having lived in Japan for decades, the widely traveled and erudite, Oxford-born Iyer presents this lovely pocket compendium of oddities and insights of Japanese life . . . Provocative and elegant, Iyer’s guide succeeds precisely because it doesn’t attempt to be authoritative.”—Publisher’s Weekly [starred]

“Many pleasures to be had . . . Rarely in any writing on Japan is provocation so elegantly and surgically performed . . . A decorous rush of thoughts, observations, unsupported statements, factoids and recollections that ultimately form a shape like paint splashed on the Invisible Man.”—Financial Times

“This pleasant read, written with Iyer’s usual flair, gives readers a glimpse into Japanese culture, right from the world of anime to age-old traditions. Drawing on readings, reflections and conversations with locals and neighbours, Iyer’s latest work is a fresh and profound close look at the Land of the Rising Sun.”—Verve

“Iyer's observations and provocations are packaged in spare but descriptive prose, so fitting for the minimalist tradition in Japanese art and literature . . . A Beginner's Guide to Japan does not answer the questions a curious traveler might have about the country. Nor does it intend to. Rather, the book creates more questions and curiosities, inviting readers to experience Japan for themselves, and to become immersed in its enigmatic culture.”—Pop Matters

“One of the most profound strengths of A Beginner’s Guide to Japan is the way it winds up emphasizing what it is to feel like a beginner as much as it emphasizes Japan itself. Iyer’s assertions about Japan—those provocations—seem to come not from some obscured authorial voice, but from a specific human being who is trying to begin an intimate conversation with his reader. It’s a conversation that requires not only thought, but a capacity for wonder and close attention.”—Chapter 16