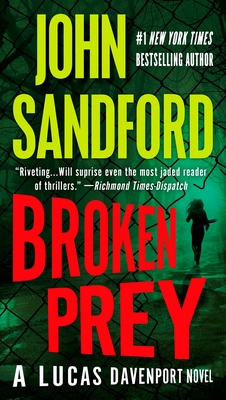 This is book number 16 in the A Prey Novel series.

The first body is of a young woman, found on a Minneapolis riverbank, her throat cut, her body scourged and put on display. Whoever did this, Lucas Davenport knows, is pushed by brain chemistry. There is something wrong with him. This isn’t a bad love affair.

The second body is found three weeks later, in a farmhouse six miles south. Same condition, same display—except this time it is a man. Nothing to link the two victims, nothing to indicate that the killings end here.

“This guy…” Lucas said. He took a deep breath, let it out as a sigh. “This guy is going to bust our chops.”

And soon he is going to do far, far worse than that…

“Sandford is a writer in control of his craft.”—Chicago Sun-Times

“Enough pulse-pounding, page-turning excitement to keep you up way past bedtime.”—Minneapolis Star Tribune

“One of the most engaging characters in contemporary fiction.”—Detroit News

“Just right for fans of The Silence of the Lambs.”—Booklist

“One of the most horrible villains this side of Hannibal.”—Richmond Times-Dispatch