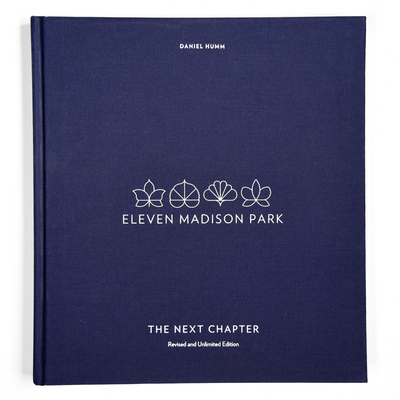 Originally published as a two-volume, signed edition and limited to only 11,000 print copies, this revised edition of Eleven Madison Park: The Next Chapter refashions the deluxe slipcase edition into one high-quality, single volume. Of the 80 recipes and stories, more than 30 of the recipes are brand new and reflect the dishes being served at the restaurant now. Along with 30 brand-new food photos, there are also nearly 15 new watercolors and stories discussing the restaurant's recent renovation, among other topics. This collection reflects on the time during which Eleven Madison Park garnered scores of accolades, including four stars from the New York Times, three Michelin stars, seven James Beard Foundation awards, and the number one spot on the World's 50 Best Restaurants list. In this fresh package, Chef Daniel Humm describes his unparalleled culinary journey and inspiration.

DANIEL HUMM is the proprietor, with Will Guidara, of the three-Michelin-starred restaurant Eleven Madison Park; the counter-service restaurant Made Nice in Manhattan; The NoMad restaurant with locations in Manhattan, Los Angeles, and Las Vegas; and Davies and Brook restaurant, opening in London in summer 2019.

"What Eleven Madison feeds...your mouth, stomach, and spirit is something else. The restaurant tries as hard as any I know to bring delight to the table with every course. It succeeds so often that only the most determinedly grumpy souls could resist."
--Pete Wells, New York Times

"If the recipe for an outstanding restaurant is creating the perfect balance between great food and impeccable service, then Eleven Madison Park co-owners Daniel Humm and Will Guidara have hit the jackpot."
--The World's 50 Best Restaurants