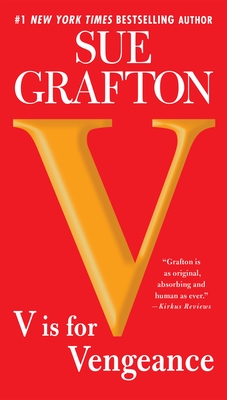 This is book number 22 in the A Kinsey Millhone Novel series.

A spiderweb of dangerous relationships lies at the heart of this daring Kinsey Millhone mystery from #1 New York Times bestselling author Sue Grafton.

Private detective Kinsey Millhone feels a bit out of place in any department store's lingerie section, but she's entirely in her element when she puts a stop to a brazen shoplifting spree. For her trouble she nearly gets run over in the parking lot by one of the fleeing thieves—and later learns that the one who didn't get away has been found dead in an apparent suicide. But Audrey Vance's grieving fiance suspects murder and hires Kinsey to investigate a case that will reveal a big story behind a small crime and lead her into a web that connects a shadowy “private banker,” an angry trophy wife, a spoiled kid with a spiraling addiction, and a brutal killer without a conscience...

Praise for V is for Vengeance

“Central to the books’ appeal is not the hoodlums and their crimes—which are often fueled by alcohol or stupidity rather than the epic, high-stakes evil driving other crime books—but rather Kinsey herself...She is witty and weary and a lot of fun.”—Los Angeles Times

“Grafton exhibits the pace, form, and technique of a marathon champ in her latest.”—The Kansas City Star

“The author has hit a high mark with her latest offering, a complex tale of love, betrayal, ambition, and, of course, murder...The only bad thing: There are just four letters left in the alphabet.”—Associated Press