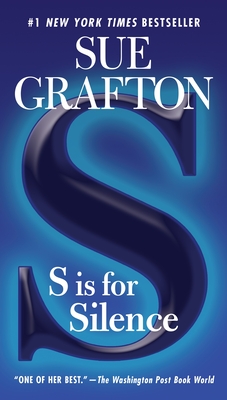 This is book number 19 in the A Kinsey Millhone Novel series.

Cases don't get much colder than that of Violet Sullivan, who disappeared from her rural California town in 1953, leaving behind an abusive husband and a seven-year-old named Daisy. But PI Kinsey Millhone has promised the now adult Daisy she'll try her best to locate Violet, dead or alive. All signs point to a runaway wife—the clothes that disappeared; the secret stash of money Violet bragged about; the brazen flirtations she indulged in with local men, including some married ones.

Kinsey tries to pick up a trail by speaking to those who remember Violet—and perhaps were more involved in her life than they let on. But the trail could lead her somewhere very dangerous. Because the case may have gone cold, but some people's feelings about Violet Sullivan still run as hot as ever...

Praise for S is for Silence

“The freshest, tautest installment in quite a while...S is for Silence gets it right.”—Entertainment Weekly

“One of the darkest and most complex of her stories.”—The Miami Herald

“Millhone’s complexity is mirrored by the novels that document her cases: books that nestle comfortable within the mystery genre even as they prod and push its contours.”—The Wall Street Journal