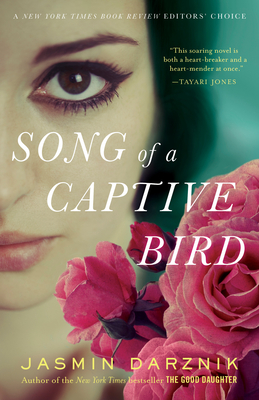 LOS ANGELES TIMES BESTSELLER • A spellbinding debut novel about the trailblazing Iranian poet Forugh Farrokhzad, who defied society’s expectations to find her voice and her destiny

“A complex and beautiful rendering of [a] vanished country and its scattered people, a reminder of the power and purpose of art, and an ode to female creativity under a patriarchy that repeatedly tries to snuff it out.”—The New York Times Book Review (Editors’ Choice)

All through her childhood in Tehran, Forugh Farrokhzad is told that Persian daughters should be quiet and modest. She is taught only to obey, but she always finds ways to rebel—gossiping with her sister among the fragrant roses of her mother’s walled garden, venturing to the forbidden rooftop to roughhouse with her three brothers, writing poems to impress her strict, disapproving father, and sneaking out to flirt with a teenage paramour over café glacé. During the summer of 1950, Forugh’s passion for poetry takes flight—and tradition seeks to clip her wings.

Forced into a suffocating marriage, Forugh runs away and falls into an affair that fuels her desire to write and to achieve freedom and independence. Forugh’s poems are considered both scandalous and brilliant; she is heralded by some as a national treasure, vilified by others as a demon influenced by the West. She perseveres, finding love with a notorious filmmaker and living by her own rules—at enormous cost. But the power of her writing only grows stronger amid the upheaval of the Iranian revolution.

Inspired by Forugh Farrokhzad’s verse, letters, films, and interviews—and including original translations of her poems—this haunting novel uses the lens of fiction to capture the tenacity, spirit, and conflicting desires of a brave woman who represents the birth of feminism in Iran—and who continues to inspire generations of women around the world.

Praise for Song of a Captive Bird

“If poetry is emotion rendered incendiary, then Forugh Farrokhzad was made of fire. . . . Song of a Captive Bird is an unsparing account of the necessity and consequences of speaking out.”—BookPage

“Sometimes, simply choosing whom to love is a political act.”—Vogue

Jasmin Darznik was born in Tehran, Iran, and moved to America when she was five years old. She is the author of the New York Times bestseller The Good Daughter: A Memoir of My Mother’s Hidden Life. Her work has been published in thirteen countries and recognized by the Steinbeck Fellows Program, the Corporation of Yaddo, and the William Saroyan International Prize. Her stories and essays have been published in The New York Times, The Washington Post, the Los Angeles Times, and elsewhere. She holds an MFA in fiction from Bennington College and a Ph.D. in English from Princeton University. Now a professor of literature and creative writing at California College of the Arts, she lives in Northern California with her family.

“A complex and beautiful rendering of [a] vanished country and its scattered people, a reminder of the power and purpose of art, and an ode to female creativity under a patriarchy that repeatedly tries to snuff it out.”—The New York Times Book Review (Editors’ Choice)

“If poetry is emotion rendered incendiary, then Forugh Farrokhzad was made of fire. . . . Song of a Captive Bird is an unsparing account of the necessity and consequences of speaking out.”—BookPage

“Sometimes, simply choosing whom to love is a political act.”—Vogue

“Sumptuously captures a fierce and turbulent life, as well as a vanished country swept away by revolution.”—Newsweek

“A stunning and powerful debut . . . At a time when our country is at war with art and women, this courageous book is required reading.”—Bret Anthony Johnston, author of Remember Me Like This

“A thrilling and provocative portrait of a powerful woman set against a sweeping panorama of Iranian history.”—Kirkus Reviews

“Written with the urgent tenderness of a love letter, this soaring novel is a heart-breaker and heart-mender at once—a gorgeous tribute to the brave and brilliant poet remembered in its pages.”—Tayari Jones, author of An American Marriage and Silver Sparrow

“These are times for stories that bring one culture nearer to another, and that is exactly what Jasmin Darznik has done, pulling close the hearts of girls and women and poets to tell Forugh Farrokhzad’s remarkable story.”—Laleh Khadivi, author of A Good Country

“Farrokhzad is known as the Sylvia Plath of Iran, and the two poets were contemporaries, living lives at once starkly different and remarkably attuned, then dying young and tragically. Plath’s renown is universal; Darznik’s enthralling and illuminating novel will introduce Farrokhzad to a whole new world of readers.”—Booklist (starred review)

“A beautiful writer! In elegant, intimate prose, Darznik portrays pre-Revolutionary Iran and a woman who transcended the prejudices of her time.”—Susan Cheever

“Darznik’s marvelous homage to Forugh captures the frustration and determination she must have felt to overcome the strictures of her environment, beautifully recreating her difficult path to fame.”—Publishers Weekly

“Farrokhzad’s determination to live freely and authentically, and to express that determination in her art, proved unbearable to the fundamentalist state. Darznik brings her own poetic sensibility to bear on this tragic, but ultimately inspiring, act of creative remembrance.”—Jonathan Dee, author of The Locals

“Alive and sensuous, Darznik’s prose mirrors Forugh’s poetry, making no separation between life and work, leaving open and unguarded that door we so often find closed.”—Donia Bijan, author of The Last Days of Café Leila