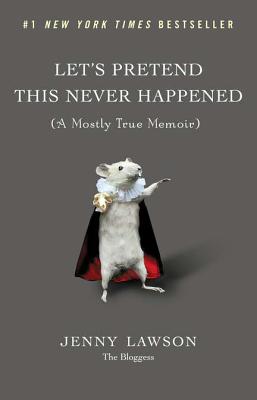 “I just can't recommend Lawson's new memoir highly enough! However, my recommendation does come with a warning: Do not read this in public unless you want others staring at you and wondering if you've gone mad because you're laughing hysterically. The daughter of an off-kilter taxidermist and a mother, who, for the most part, turned her head the other way, Jenny has her issues resulting from standing inside a dead deer at a young age, growing up with live raccoons in the house, and being an arsonist at the age of three. Those embarrassing moments that we all wished had never happened? Well, Jenny tells all. Laughter really is the best medicine, so make sure you don't miss this one!”
— Linda Grana, DIESEL, A Bookstore, Oakland, CA

For fans of Tina Fey and David Sedaris—Internet star Jenny Lawson, aka The Bloggess, makes her literary debut.

Jenny Lawson realized that the most mortifying moments of our lives—the ones we’d like to pretend never happened—are in fact the ones that define us. In the #1 New York Times bestseller, Let’s Pretend This Never Happened, Lawson takes readers on a hilarious journey recalling her bizarre upbringing in rural Texas, her devastatingly awkward high school years, and her relationship with her long-suffering husband, Victor. Chapters include: “Stanley the Magical, Talking Squirrel”; “A Series of Angry Post-It Notes to My Husband”; “My Vagina Is Fine. Thanks for Asking”; “And Then I Snuck a Dead Cuban Alligator on an Airplane.” Pictures with captions (no one would believe these things without proof) accompany the text.

Jenny Lawson is a columnist and one of the most popular bloggers on Twitter (hundreds of thousands of followers). Her blog, www.thebloggess.com, averages between 2-3 million page views per month. Jenny lives in the Texas Hill Country with her husband and daughter.

"Even when I was funny, I wasn't this funny."  —Augusten Burroughs, author of Running With Scissors and This is How

“There’s something wrong with Jenny Lawson—magnificently wrong. I defy you to read her work and not hurt yourself laughing.” —Jen Lancaster


“The Bloggess writes stuff that actually is laugh-out-loud, but you know that really you shouldn’t be laughing and probably you’ll go to hell for laughing, so maybe you shouldn’t read it. That would be safer and wiser.” —Neil Gaiman

“Jenny Lawson’s writing is nothing less than revolutionary. . . . I say this without a hint of exaggeration: She may be one of the most progressive women’s voices of our time.” —Karen Walrond, author of The Beauty of Different