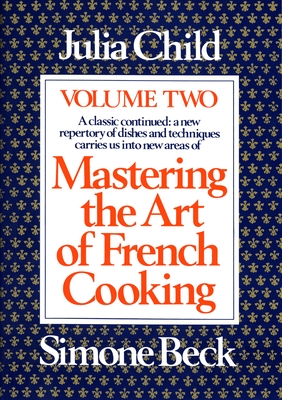 Working from the principle that “mastering any art is a continuing process,” Julia Child and Simone Beck gathered together a brilliant selection of new dishes to bring you to a yet higher level of culinary mastery.

They have searched out more of the classic dishes and regional specialties of France, and adapted them so that Americans, working with American ingredients, in American kitchens, can achieve the incomparable flavors and aromas that bring up a rush of memories—of lunch at a country inn in Provence, of an evening at a great Paris restaurant, of the essential cooking of France.

From French bread to salted goose, from peasant ragoûts to royal Napoleons, recipes are written with the same detail, exactness, and clarity that are the soul of Mastering the Art of French Cooking.

Simone ("Simca") Beck was born in 1904 at Tocqueville en Caux, Normandy. In 1933, she began to study at the Cordon Bleu, then the world’s supreme school of cuisine. In 1948 she was approached by a friend, Louisette Bertholle (now Comtesse de Nalèche), to collaborate on a French cookbook for Americans. In 1951, at the suggestion of her husband, they began to search for an American to help them, and a friend introduced Simca to Julia Child, then studying cooking in Paris. Soon afterward, the three women formed a cooking school, L’École des Trois Gourmandes, and began the collaboration that produced the several volumes of Mastering the Art of French Cooking. She died in 1991.

Praise for Julia Child and Mastering the Art of French Cooking

“Mastering the Art of French Cooking was one of my first introductions to my foundation of understanding the art of French cooking. The combination of reading Julia’s book, working in the kitchen, and watching her television shows helped lead me to my beginnings in serious cuisine. Julia is . . . the grande dame of cooking, who has touched all of our lives with her immense respect and appreciation of cuisine.” —Emeril Lagasse, Emeril’s Restaurant

“1961 A.D. Julia Child’s Mastering the Art of French Cooking is published. Her black-and-white TV show on WGBH in Boston soon follows. Child is one of the great teachers of the millennium: She is intelligent and charismatic, and her undistinguished manual skills are not daunting to her viewers. An entire generation of ambitious American home cooks is instantly born.” —Jeffrey Steingarten