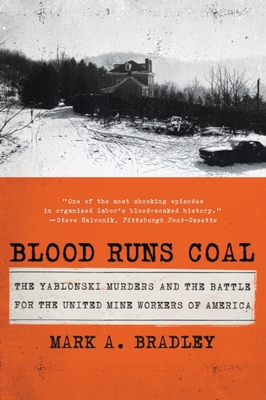 A vivid account of “one of the most shocking episodes in organized labor’s blood-soaked history” (Steve Halvonik, Pittsburgh Post-Gazette).

In the early hours of New Year’s Eve 1969, in the small soft coal mining borough of Clarksville, Pennsylvania, longtime trade union insider Joseph “Jock” Yablonski and his wife and daughter were brutally murdered in their old stone farmhouse. Behind the assassination was the corrupt president of the United Mine Workers of America (UMWA), Tony Boyle, who had long embezzled UMWA funds, silenced intra-union dissent, and served the interests of Big Coal companies—and would do anything to maintain power. The most infamous crimes in the history of American labor unions, the Yablonski murders catalyzed the first successful rank-and-file takeover of a major labor union in modern US history. Blood Runs Coal is an extraordinary portrait of one of the nation’s major unions on the brink of historical change.

Mark A. Bradley has been a US Department of Justice lawyer, a criminal defense lawyer, and a CIA intelligence officer. Currently the director of the Information Security Oversight Office of the National Archives and Records Administration, he lives in Arlington, Virginia.