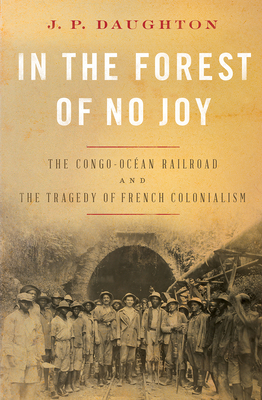 Shortlisted for the 2022 Cundill History Prize

Shortlisted for the 2022 American Library in Paris Book Award

The epic story of the Congo-Océan railroad and the human costs and contradictions of modern empire.

The Congo-Océan railroad stretches across the Republic of Congo from Brazzaville to the Atlantic port of Pointe-Noir. It was completed in 1934, when Equatorial Africa was a French colony, and it stands as one of the deadliest construction projects in history. Colonial workers were subjects of an ostensibly democratic nation whose motto read “Liberty, Equality, Fraternity,” but liberal ideals were savaged by a cruelly indifferent administrative state.

African workers were forcibly conscripted and separated from their families, and subjected to hellish conditions as they hacked their way through dense tropical foliage—a “forest of no joy”; excavated by hand thousands of tons of earth in order to lay down track; blasted their way through rock to construct tunnels; or risked their lives building bridges over otherwise impassable rivers. In the process, they suffered disease, malnutrition, and rampant physical abuse, likely resulting in at least 20,000 deaths.

In the Forest of No Joy captures in vivid detail the experiences of the men, women, and children who toiled on the railroad, and forces a reassessment of the moral relationship between modern industrialized empires and what could be called global humanitarian impulses—the desire to improve the lives of people outside of Europe. Drawing on exhaustive research in French and Congolese archives, a chilling documentary record, and heartbreaking photographic evidence, J.P. Daughton tells the epic story of the Congo-Océan railroad, and in doing so reveals the human costs and contradictions of modern empire.

J. P. Daughton is an award-winning historian of modern Europe and European colonialism and has taught at the University of California, Berkeley, and Stanford University. He has provided media commentary for the Atlantic, Newsweek, Time, and CNN. He lives in San Francisco, California.

Masterful.... what
makes it so compelling is the divide it exposes between the often admirable
intentions of colonial bureaucrats who did genuinely think they were lifting
Africans out of poverty, and the grim reality that they enabled.
— The Economist

[An] unsparing
history.... By highlighting individual stories, Daughton upends the
Eurocentric narrative of the documents he studies, in which ‘white triumph
would always discount African trauma.’
— The New Yorker

An unflinching book,
often harrowing in its depiction of the depravity on display in French
Equatorial Africa.
— Tunku Varadarajan - Wall Street Journal

Relying on
journalistic accounts from the period and the excellent use of archival
materials, [Daughton’s] book paints a vivid picture of colonialism in central
Africa.
— Nicolas van de Walle - Foreign Affairs

If such a shockingly large number of people had been worked to death building a railroad in Europe or the United States, it would be as notorious as the worst deeds of Hitler or Stalin. J.P. Daughton puts this little-known tragedy on the record in a searing, unforgettable, and necessary way.
— Adam Hochschild, author of King Leopold’s Ghost: A Story of Greed, Terror, and Heroism in Colonial Africa

Meticulously researched, vividly narrated, and devastatingly compelling, In the Forest of No Joy provides a significant contribution to the mounting evidence that lays bare the self-deceiving lie at the heart of Empire, that of the ‘civilizing mission.’ J.P. Daughton details the horrific abuse carried out by the colonial regime upon the African population during the construction of the Congo-Océan railroad, from forced labor to torture and murder, and finds evidence not just of African suffering, but also African resistance.

— Aminatta Forna, author of The Devil that Danced on the Water

In this tour de force of historical research, J.P. Daughton tells the horrifying story of the Congo-Océan railroad, a massive, ill-conceived construction project (1921-34) whose French overseers doomed some 20,000 African workers to die. This story, revealing as it does France’s imperial hubris and callous disregard of human suffering, should have been told a long time ago. But it has been buried by bureaucrats, overlooked by historians, and made invisible to those who chose not to see. We owe Daughton a great debt for bringing it to light and for masterfully adding a new chapter to the tragic history of Central Africa under European colonial rule.
— Edward Berenson, department chair and professor of history, New York University, and author of The Accusation: Blood Libel in an American Town

Sailing with J.P. Daughton into the French empire’s heart of darkness is a visceral, haunting, and memorable experience. In the Forest of No Joy will stand alongside Adam Hochschild’s King Leopold’s Ghost as a chilling testament to the crimes of European ‘civilization.’

— Marcus Rediker, author of The Slave Ship: A Human History

In his compelling study, J.P. Daughton evokes the murderous violence that accompanied the construction in the 1920s of a tortuous railroad in southern French Equatorial Africa, sadly representative of the French imperial project. Daughton presents a chilling analysis of French colonial attitudes toward indigenous peoples, while vividly relating the experiences of tens of thousands of ordinary Africans.
— John Merriman, Charles Seymour Professor of History, Yale University

Daughton masterfully
relays.... a compelling narrative of the effects of imperialism, still
apparent in the 21st century.... This outstanding work should satisfy
history enthusiasts of all levels. Daughton’s writing is heartfelt throughout.
— Library Journal, starred review

Meticulous and enraging.... Daughton skillfully reads against the grain of these official records to
uncover the harrowing reality faced by native Africans. This is a devastating
record of the horrors of colonialism.
— Publishers Weekly