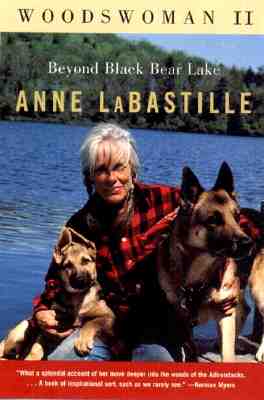 "If you’re looking for a real declaration of independence, and a deeper social experiment, try a woman living alone in the Adirondacks for decades." —Megan Mayhew Bergman, Guardian

Anne LaBastille found peace and solitude in the log cabin she built for herself at Black Bear Lake. But as the years passed, the outside world intruded in various ways: curious fans, after reading her best-selling book Woodswoman, tracked her down; land developers arrived; there was air and noise pollution and the damages of acid rain.

Woodswoman II is the story of the author's decision to retreat farther, a half-mile behind her main cabin, and build a tiny cabin—fashioned after the one in Thoreau's Walden—in which she could write and contemplate. In this book (originally published under the title Beyond Black Bear Lake) she writes movingly of her life with two German shepherds as companions, of a sustaining relationship with a man as independent as herself, and her renewed bond with nature.

Anne LaBastille (1933—2011) was a wildlife ecologist, photographer, and the author of more than a dozen books, including the four book Woodswoman series.

Anne LaBastille has done it again! What a splendid account of her move deeper into the woods of the Adirondacks—and deeper into her independent life as a consultant and conservationist…A book of the inspirational sort, such as we rarely see.
— Norman Myers, author of The Primary Source: Tropical Forests and Our Future