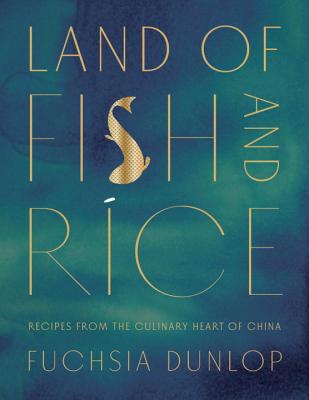 The lower Yangtze region, or Jiangnan, with its modern capital Shanghai, has been known since ancient times as a “land of fish and rice.” For centuries, local cooks have harvested the bounty of its lakes, rivers, fields, and mountains to create a cuisine renowned for its delicacy and beauty. In Land of Fish and Rice, Fuchsia Dunlop draws on years of study and exploration to present the recipes, techniques, and ingredients of the Jiangnan kitchen. You will be inspired to try classic dishes such as Beggar’s Chicken and sumptuous Dongpo Pork, as well as fresh, simple recipes such as Clear-Steamed Sea Bass and Fresh Soybeans with Pickled Greens. Evocatively written and featuring stunning recipe photography, this is an important new work celebrating one of China’s most fascinating culinary regions.

Winner, 2017 Cookbook of the Year (British Guild of Food Writers)

Fuchsia Dunlop is the author of Land of Fish and Rice, among other books. She has won four James Beard awards for her writing and lives in London.

In Land of Fish and Rice, Fuchsia distills her characteristic in-depth studies (she's a cook who learns by doing) into easy-going and understated prose and inspiringly simple recipes that really work.

In Land of Fish and Rice Fuchsia Dunlop introduces us to the little-known region south of the Yangtze River, its long and deep influence on Chinese gastronomy, and its surprisingly subtle, refreshing flavors. Land of Fish and Rice is authoritative and absorbing, full of insight, enticing recipes, and infectious delight in the pleasures of the table.

— Harold McGee, James Beard Award-Winning author of On Food and Cooking: The Science and Lore of the Kitchen

Through gifted storytelling and stunning photographs, Fuchsia Dunlop highlights a rich tradition of seasonality and sustainability. Her simple and delicious flavors from the southern Yangtze inspire me and surely will inspire a new generation of cooks.
— Alice Waters, Owner, Chez Panisse Restaurant and author of The Art of Simple Food

Fuchsia Dunlop’s homage to Jiangnan cooking is destined to be a classic. She takes us on a rare insider’s culinary odyssey through the Lower Yangtze region sharing its rich culinary traditions. Unusual specialties like chrysanthemum leaves with pine nuts, Buddhist vegetarian tofu rolls, and fresh clam custard are gathered from years of travel and research. This is a major contribution to our understanding of Chinese cuisine. The exquisite photography is an added bonus.
— Grace Young, author of Stir-Frying to the Sky’s Edge and Wisdom of the Chinese Kitchen

This is an enthralling book. Fuchsia Dunlop has fallen
in love with Jiangnan, and her book makes us fall in love too.
— Claudia Roden, author of The New Book of Middle Eastern Food

This beautiful book spoke to me personally. My parents were from “South of the Yangtze” and just reading the recipes evoked long lost smell and taste memories that brought tears to my eyes. Fuchsia has eloquently but simply captured the rich cuisine of a region unfamiliar to most Westerners.
— Cecilia Chiang, Author, Chef, and Founder of The Mandarin Restaurant in San Francisco

Cookbooks turn up every few years with the promise of
an everyday mastery of Chinese cuisine. Their mark is fleeting, and cooks
happily return to their manila envelopes of takeout menus. This year may be
different. . . . For her latest, Ms. Dunlop, a British cook and food writer who has
been studying Chinese cooking since the mid-1990s, dives deep into the balanced
flavors of Jiangnan. These are recipes to bring out the optimal flavors of the
ingredients, and Ms. Dunlop’s approachable instructions bring readers closer to
success.
— New York Times--Best Cookbooks of Fall 2016

Land of Fish and Rice by the revered British pro Fuchsia Dunlop is a focused exploration of the food of Jiangnan, an area famous among Chinese for its subtle cuisine—and now revealed to us.

An exquisite and marvelously
detailed work. With many of these dishes, their brilliance lies in their
minimalism. So far, every recipe I’ve tried consists of relatively few ingredients,
which, when combined, sparkle with flavour.
— Samuel Fromartz - The Washington Post

Another masterpiece from one of my
favorite authors. Dunlop is a gifted writer with intriguing recipes that work.
I have every one of her titles and if the woman wrote a book about
how to stir a pot of water, I would buy it. Gorgeous photographs, haunting
narrative, and recipes you will not find anywhere else. . . this author is a
treasure.
— Eat Your Books

Dunlop
has a lively prose style that makes you just wanna go, like, smack a cucumber
or take apart a duck with a cleaver. . . . Spectacular.
— Susan T. Chang - The Level Teaspoon Podcast

Land of Fish and Rice closes on a strikingly humble note, with Dunlop thanking her Chinese friends for their help, adding she “could never do justice to their extraordinary culinary tradition.” Fortunately for us, she is mistaken.

Dunlop’s prose is engaging and informative, and the recipes she chooses
encompass the complex and the happily simple. . . . You will learn much about
regional Chinese food, and you will want to make these recipes as soon as
reasonably possible.
— Los Angeles Times

You can’t find a Chinese food cookbook with shorter ingredients lists than this one has—a welcome surprise for the genre.
— Washington Post