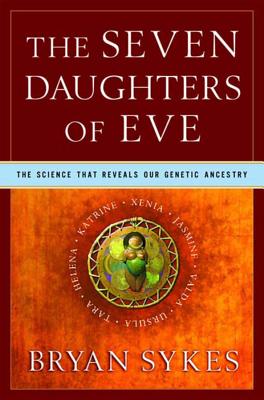 By Bryan Sykes
Out of Print

The Seven Daughters of Eve is a thrilling work of science that reveals how biological research can enrich our tangled lives. It is a book that chronicles many of the most exciting developments in genetics over the past decade by a man who is not only a brilliant scientist but also a gifted and thoroughly engaging writer. It ultimately demonstrates how much more we still have to discover about the absorbing story of human evolution.

One of the most dramatic stories of genetic discovery since James Watson's The Double Helix—a work whose scientific and cultural reverberations will be discussed for years to come. In 1994 Professor Bryan Sykes, a leading world authority on DNA and human evolution, was called in to examine the frozen remains of a man trapped in glacial ice in northern Italy. News of both the Ice Man's discovery and his age, which was put at over five thousand years, fascinated scientists and newspapers throughout the world. But what made Sykes's story particularly revelatory was his successful identification of a genetic descendant of the Ice Man, a woman living in Great Britain today. How was Sykes able to locate a living relative of a man who died thousands of years ago? In The Seven Daughters of Eve, he gives us a firsthand account of his research into a remarkable gene, which passes undiluted from generation to generation through the maternal line. After plotting thousands of DNA sequences from all over the world, Sykes found that they clustered around a handful of distinct groups. Among Europeans and North American Caucasians, there are, in fact, only seven. This conclusion was staggering: almost everyone of native European descent, wherever they may live throughout the world, can trace their ancestry back to one of seven women, the Seven Daughters of Eve. Naming them Ursula, Xenia, Helena, Velda, Tara, Katrine, and Jasmine, Sykes has created portraits of their disparate worlds by mapping the migratory patterns followed by millions of their ancestors. In reading the stories of these seven women, we learn exactly how our origins can be traced, how and where our ancient genetic ancestors lived, and how we are each living proof of the almost indestructible strands of DNA, which have survived over so many thousands of years. Indeed, The Seven Daughters of Eve is filled with dramatic stories: from Sykes's identification, using DNA samples from two living relatives, of the remains of Tsar Nicholas and Tsaress Alexandra, to the Caribbean woman whose family had been sold into slavery centuries before and whose ancestry Sykes was able to trace back to the Eastern coast of central Africa. Ultimately, Sykes's investigation reveals that, as a race, what humans have in common is more deeply embedded than what separates us.

Bryan Sykes, professor of human genetics at Oxford University, pioneered the use of DNA in exploring the human past. He is the author of Saxons, Vikings, and Celts and the New York Times bestseller The Seven Daughters of Eve.