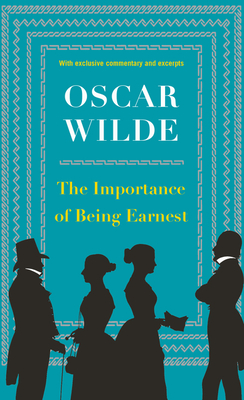 The full text of Oscar Wilde's beloved comedy of manners, including exclusive commentary, selections from Wilde's correspondence, and excerpts from the original four-act version.

The Importance of Being Earnest shows a full measure of Oscar Wilde's legendary wit, and embodies more than any of his other plays his decency and warmth.

This edition contains substantial excerpts from the original four-act version which was never produced, as well as the full text of the final three-act version, selections from Wilde's correspondence, and commentary by George Bernard Shaw, Max Beerbohm, St. John Hankin, and James Agate.

“It is exquisitely trivial, a delicate bubble of fancy and it has its philosophy; that we should treat all trivial things of life seriously, and all the serious things of life with sincere and studied triviality.” –Oscar Wilde


Born in Ireland in 1856, Oscar Wilde was a noted essayist, playwright, fairy tale writer and poet, as well as an early leader of the Aesthetic Movement. His plays include: An Ideal Husband, Salome, A Woman of No Importance, and Lady Windermere's Fan. Among his best known stories are The Picture of Dorian Gray and The Canterville Ghost.