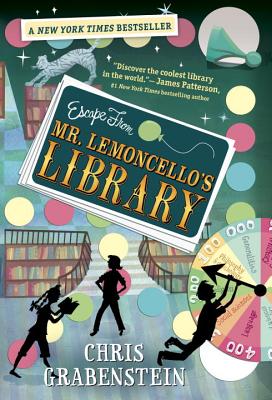 By Chris Grabenstein
Out of Print

Discover what James Patterson calls “the coolest library in the world” in this fun-filled, action-packed bestseller from the much-loved co-author of I Funny and Treasure Hunters!

When Kyle learns that the world's most famous game maker, Luigi Lemoncello, has designed the town's new library and is having an invitation-only lock-in on opening night, he's determined to be there! But the tricky part isn't getting into the library—it's getting out. Because when morning comes, the doors stay locked. Kyle and the other kids must solve every clue and figure out every secret puzzle to find the hidden escape route!

Don't miss bonus content in the back of the book—extra puzzles, an author Q&A, and more! And look for the puzzle-packed sequels—Mr. Lemoncello's Library Olympics and Mr. Lemoncello’s Great Library Race!

“Full of puzzles to think about, puns to groan at . . . this solid, tightly plotted read is a winner for readers and game-players alike.” —Kirkus Reviews, Starred Review

CHRIS GRABENSTEIN is the Agatha and Anthony award-winning author of The Crossroads and The Hanging Hill as well as several adult thrillers. He used to write TV and radio commercials and has written for The Muppets. Chris was born in Buffalo, New York, and moved to Chattanooga, Tennessee, when he was 10. After college, he moved to New York City to become an actor and writer. Currently, Chris and his wife, JJ, live in New York City with three cats and a dog named Fred who starred in Chitty Chitty Bang Bang on Broadway.

Here's what people are saying about the Mr. Lemoncello books!
A New York Times Bestseller

"Discover the coolest library in the world."—James Patterson

* "A worthy successor to the original madman puzzle-master himself, Willy Wonka."—Booklist, Starred

* "A winner for readers and game-players alike."—Kirkus Reviews, Starred

"Will have readers racing to pick up the next volume."—School Library Journal