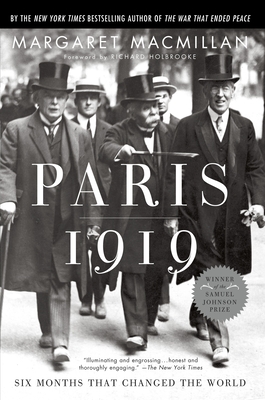 Winner of the Duff Cooper Prize

For six months in 1919, after the end of “the war to end all wars,” the Big Three—President Woodrow Wilson, British prime minister David Lloyd George, and French premier Georges Clemenceau—met in Paris to shape a lasting peace. In this landmark work of narrative history, Margaret MacMillan gives a dramatic and intimate view of those fateful days, which saw new political entities—Iraq, Yugoslavia, and Palestine, among them—born out of the ruins of bankrupt empires, and the borders of the modern world redrawn.

Margaret MacMillan received her Ph.D. from Oxford University and is provost of Trinity College and professor of history at the University of Toronto. Her previous books include Women of the Raj and Canada and NATO. Published as Peacemakers in England, Paris 1919 was a bestseller chosen by Roy Jenkins as his favorite book of the year. It won the Samuel Johnson Prize, the PEN Hessell Tiltman Prize, and the Duff Cooper Prize and was a finalist for the Westminster Medal in Military Literature. MacMillan, the great-granddaughter of David Lloyd George, lives in Toronto.

“The history of the 1919 Paris peace talks following World War I is a blueprint of the political and social upheavals bedeviling the planet now. . . . A wealth of colorful detail and a concentration on the strange characters many of these statesmen were keep [MacMillan’s] narrative lively.”
—The New York Times Book Review

“MacMillan’s book reminds us of the main lesson learned at such a high cost in Paris in 1919: Peace is not something that can be imposed at the conference table. It can grow only from the hearts of people.”
—Los Angeles Times

“Beautifully written, full of judgment and wisdom, Paris 1919 is a pleasure to read and vibrates with the passions of the early twentieth century and of ours.”
—San Francisco Chronicle

“MacMillan is a superb writer who can bring history to life.”
—The Philadelphia Inquirer

“For anyone interested in knowing how historic mistakes can morph into later historic problems, this brilliant book is a must-read.”
—Chicago Tribune